On Tuesday 13, 2022 NXT 2.0 celebrates its first anniversary with a special show featuring match stipulations and opponents voted for by the fans.

WWE revealed the new version of NXT on September 14th 2021 as NXT 2.0. The show received an injection of colour, vibrancy and new faces.

The relaunch featured a plethora of changes for the much-loved NXT brand. Everything from lighting to music and ring ropes to Superstars was altered.

Fans met the relaunch with mixed reactions. Some enjoyed the new aspects of the show while others found it a jarring and unfamiliar experience. However, the overall product has remained entertaining and enjoyable. The show has produced some excellent matches and brilliant moments while proving more beneficial than the original NXT.

NXT 2.0 has seen the brand return to it’s developmental roots with more emphasis on wrestlers creating a character that will allow for an easier transition to the main roster. This is a stark contrast to the black and juggernaut that it had become featuring some of the best wrestlers in the world.

The roster now boasts an excellent mix of Superstars and characters like Tony D’Angelo, Tiffany Stratton, Nikita Lyons, and Grayson Waller to name but a few who are all thriving on the show. Their collective star’s are rising as NXT 2.0 continues to provide them and many others with the stage they need to prepare for life on Raw and SmackDown.

As NXT 2.0 heads towards its first anniversary, let’s celebrate some of the best moments in its first year. 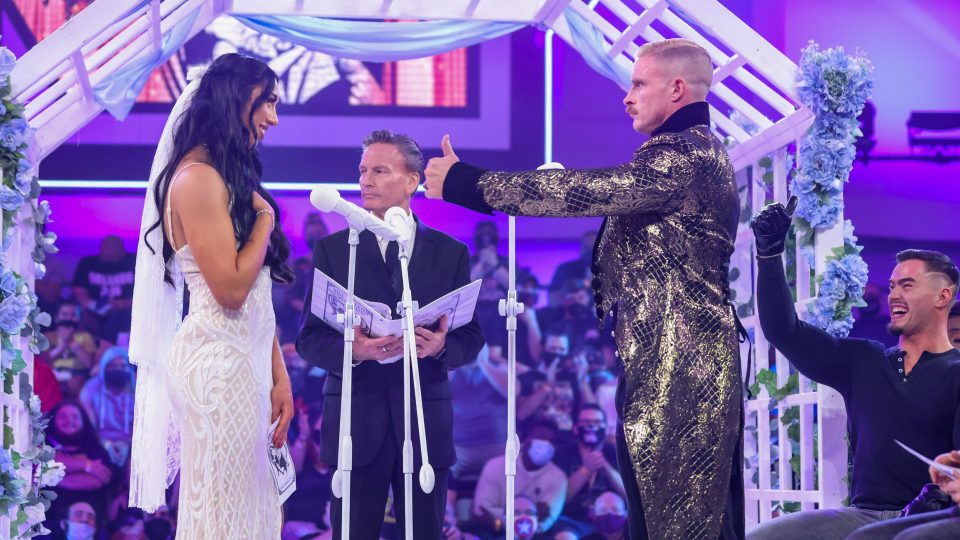 One of NXT 2.0 best storylines was the love between Indi Hartwell and Dexter Lumis affectionately known as InDex.

The love story between the two featured some of NXT’s best moments including Johnny Gargano and Candice LeRae’s initial resistance to the relationship and Lumis’ excellent Bachelor Party vignette.

Things nearly went array when the Marriage Official asked if anyone believes that Hartwell and Lumis should not be joined in matrimony to speak now or forever hold their peace, resulting in a resounding show of hands. But Lumis resolved the situation by revealing a hatchet hidden in his jacket which made them change their mind.

Indi delivered her vows pouring her heart out to stating she loves Dexter despite others thinking he is a creep and a stalker. When it came to Lumis’ vows, the silent stalker gave a thumbs up before hilariously taking out the officiant for telling him that he should have more to his vows.

Beth Phoenix then revealed that she was ordained last night and she would now officiate the wedding. The live audience cheered as the WWE Hall of Famer announced the couple as husband and wife to close out the highly-entertaining segment.

The success of the angle is a testament to the two performers. The majority of love angles and wrestling weddings tend to fall flat, but Hartwell and Lumis found the perfect balance of comedy and camp resulting in an enjoyable and memorable story. 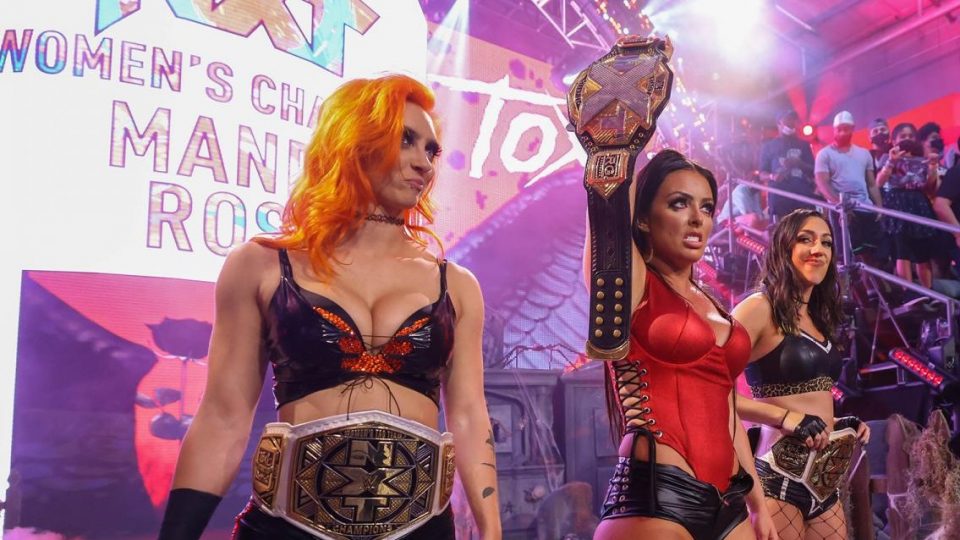 Mandy Rose made her surprise return to NXT in July 2021, unveiling a new look as well as a new faction, Toxic Attraction.

The faction allowed Rose to reinvent herself and introduce a darker look and attitude, which signifies an edgier side to her character.

The trio of Rose, Gigi Dolin and Jacey Jayne debuted on the premiere episode of the relaunch. Rose took the young duo under her wing in a connection, which has since paid dividends.

The trio put the entire women’s division on notice and made an immediate impact. Rose shockingly captured the NXT Women’s Championship from Raquel Gonzalez while Dolin and Jayne seized the Women’s Tag Team Championships.

Toxic Attraction has continued to dominate NXT 2.0’s women’s division since their title victories. Rose has held the women’s title for a whopping a 300+days, while Dolin and Jayne are two-time women’s tag team champions.

Their arrival symbolized the change from NXT to NXT 2.0. They are new, young and edgy. The trio brought a strong sexually-confident energy to programme that made them one of the best things about the show. 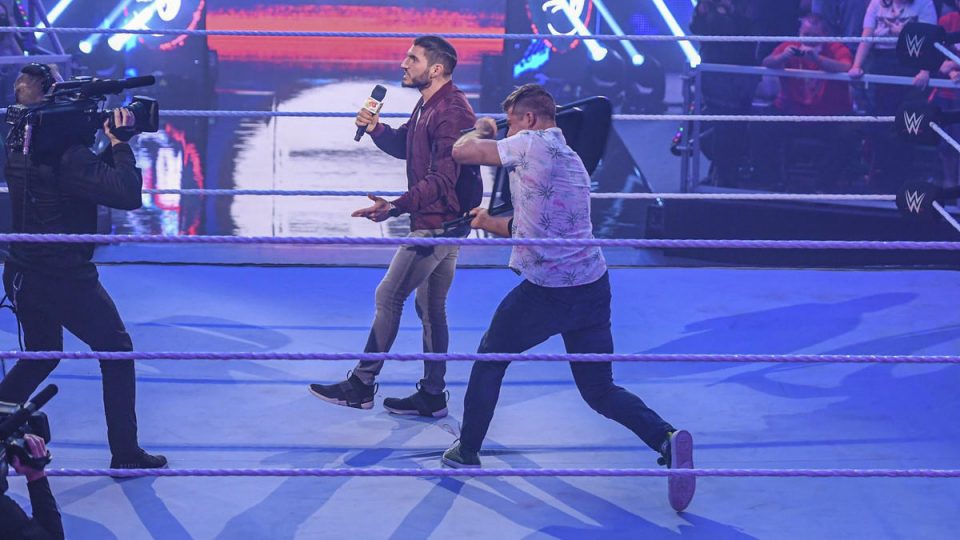 It might seem strange to list someone leaving the brand as one it’s best moments, but the fact is that Johnny Gargano’s NXT exit was nigh-on perfect.

With his contract set to expire on December 10th, Johnny Gargano took to the ring on the December 7th edition of the show to say goodbye. The star had been a cornerstone of the ‘Black and Gold Era’ and had helped the brand reach heights it had no right reaching. His feud and friendship with Tommaso Ciampa will be spoken about long into the future, while the matches the pair put on remain revered by fans to this day.

With microphone in hand, Gargano addressed fans in an emotional segment before being attacked by Grayson Waller. While the assault cut the former NXT Champion short, it helped establish Waller as one of the biggest heels on the show. Professional to the end, Gargano was making sure to put someone over on the way out.

Although many expected Gargano never to return to WWE and head to AEW when he decided to return to the ring, a change of leadership at the top of the company altered the landscape. As such, the star arrived on Monday Night Raw on August 22nd 2022 to a monster ovation. 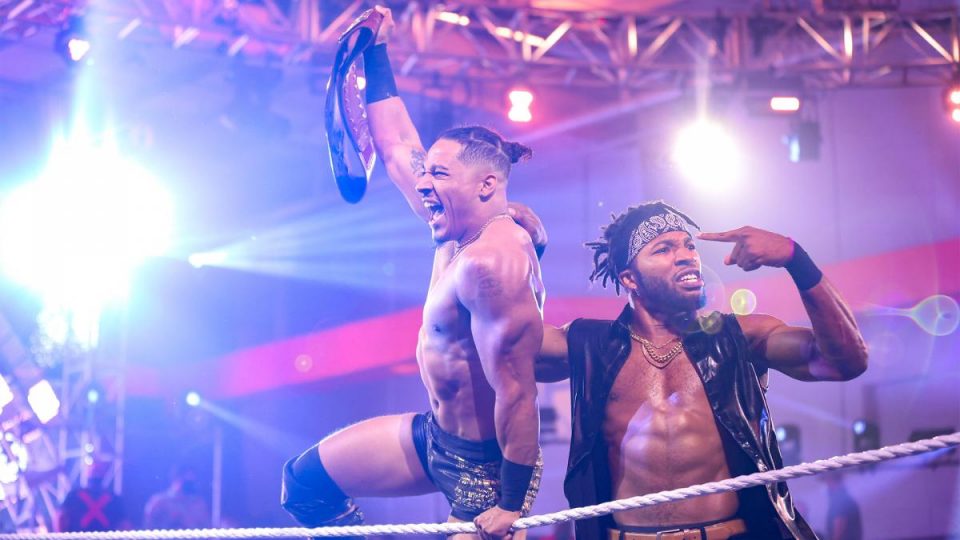 Carmelo Hayes is undoubtedly one of NXT 2.0’s most successful Superstars. He possesses tremendous in-ring abilities, undeniable charisma, and is a great talker. He is the complete package and most certainly has a bright future ahead of him.

Those behind NXT put a tonne of stock in the Superstar almost instantly by having him win the NXT Breakout Tournament. Hayes would use his tournament prize wisely and cash-in his contract against Isiah Swerve Scott and capture his first title in NXT.

His success would continue when he unified the NXT North American and Cruiserweight Championship against Roderick Strong at New Year’s Evil earlier this year.

The champions put on an incredible match, in which both competitors went all out to get their hands raised in victory. The action remained frenetic throughout to the delight of the audience, and in the end, Hayes was able to pin Strong to remain NXT North American Champion.

The new champion proudly raised both belts above his head as he celebrated to the adulation of the crowd in what was an amazing moment for the bona fide megastar.

1. The Crowning of Bron Breakker 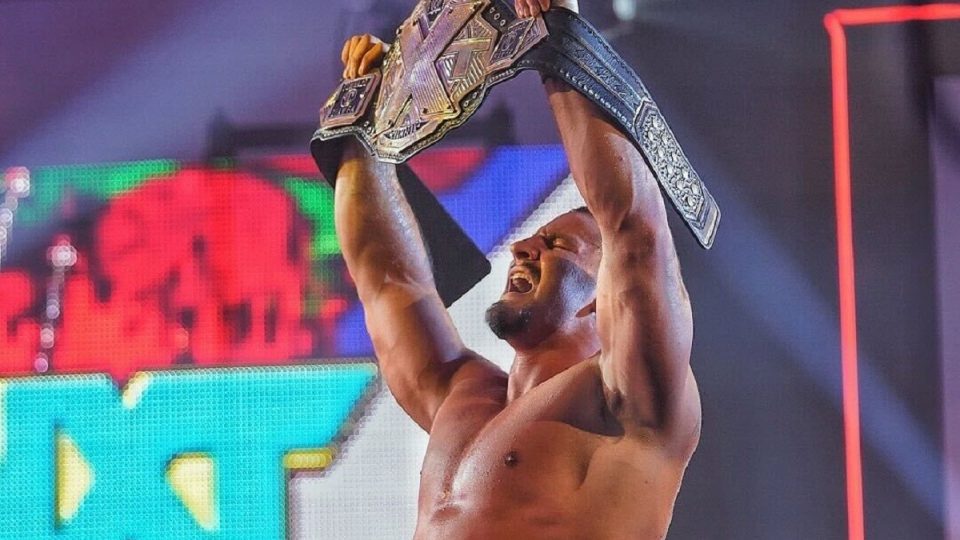 There can be no question, Bron Breakker is the face of NXT 2.0. Much like the emphasis of the brand, the rising Superstar is loud, colourful, and vibrant. During his early entrances, he would demolish, smash, and even chainsaw statues of the old NXT logo in a not very subtle message to everyone watching.

Upon his arrival, it was clear there were big plans for the second-generation Superstar. The youthful powerhouse was everything the reinvention of the developmental brand was meant for. His physique, athleticism, and previous career in football is exactly what WWE looks for in a future WrestleMania main eventer.

His programme with NXT stalwart Tommaso Ciampa over the NXT Championship made him an instant main ever player and he has been there ever since. The champ and challenger had an intriguing rivalry that ultimately resulted in the passing of the torch moment as Breakker defeated Ciampa for the championship.

Ciampa was an integral part of NXT’s success as it moulded itself as WWE’s third brand. His epic feud with long-time friend Johnny Gargano will go down as one of the company’s greatest rivalries and his obsession over the NXT Championship made him one of the best heels in the business. He was synonymous with the black and gold brand and its title and for him to be the one to crown Breakker as the new champion was a telling and monumental moment.

Breakker, is now a two-time NXT Champion, having reclaimed from Dolph Ziggler on Monday Night Raw in another big win for the young star. He has gone on to dominate all comers to him and his title. His star continues to rise and we will undoubtedly see him on the big WWE stage soon and it all started with his big title win against Ciampa.