Since Brock Lesnar returned to WWE in 2012, The Beast Incarnate has been the man at the helm of all their major events. With or without championship gold around his waist, all of Lesnar’s matches held great importance as he established what a “part-timer” truly was to WWE fans. And while fans haven’t always loved Brock Lesnar’s work, he has managed to pave the second half of his wrestling career into one that is worthy of the WWE Hall of Fame itself. Lesnar has made “Suplex City” his mantra for the most part, but that has not stopped him by any means as he has delivered a catalogue of matches that go down as among the best in WWE.

Fans have actually been wanting to see Lesnar’s return since WrestleMania 36, where he lost the WWE Championship to Drew McIntyre. “The Beast Incarnate” has not been seen since on WWE television, but when he does return, he will make an immediate impact. Until then, it’s good to look back at what he has done to this point.

In this article, we journey back in time to examine what was the best of The Beast since the return in 2012, as he has had some classics with future WWE Hall of Famers – whether it be with the most technical or the top of the top in terms of the company itself. Here’s a look at Brock Lesnar’s best outings since coming back to WWE for a second time. 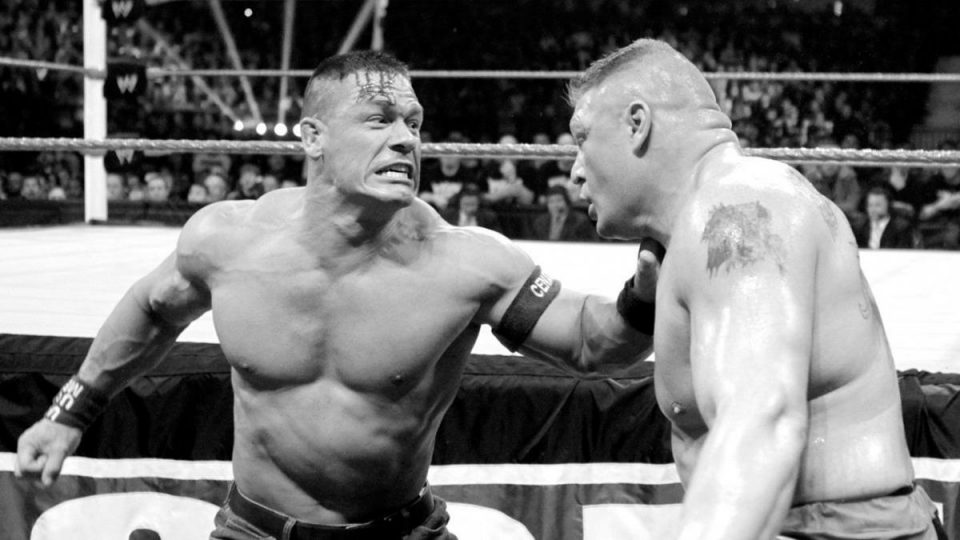 Let’s start from the very beginning really. Brock Lesnar returned to WWE in an emphatic way following WrestleMania 28, attacking John Cena with an F5 and putting the entire company on notice. This led to a feud that spilled into Extreme Rules which would ultimately be Lesnar’s first match back in the company. And the newly styled Lesnar dawned a more combat sports-like style through an aggressive amount of strikes mixed with his inhuman-like athleticism, showing everyone that it was going to be difficult to stop him moving forward. Lesnar opened up the skull of Cena within seconds of the match really getting started, only furthering the fact that he was a major threat.

The match spilled around the ring and certainly looked as though Lesnar was going to win in dominant fashion, but as Cena does, he fought valiantly to not only survive but to win. Cena would utilize the chain that he made famous during his “Word Life” days by smashing the forehead of Lesnar. This caused him to have a crimson mask as well. Cena would capture the win, ruining the return of Lesnar and only angering him to the point of no return. It very well could be considered Lesnar’s best match since coming back as it showcased far more than just his powerhouse, MMA moveset but sprinkled in what he did a decade prior. An absolute war between “The Franchise” and “The Beast.”

Brock Lesnar vs. CM Punk in a No Disqualification Match (SummerSlam, 8/18/13) 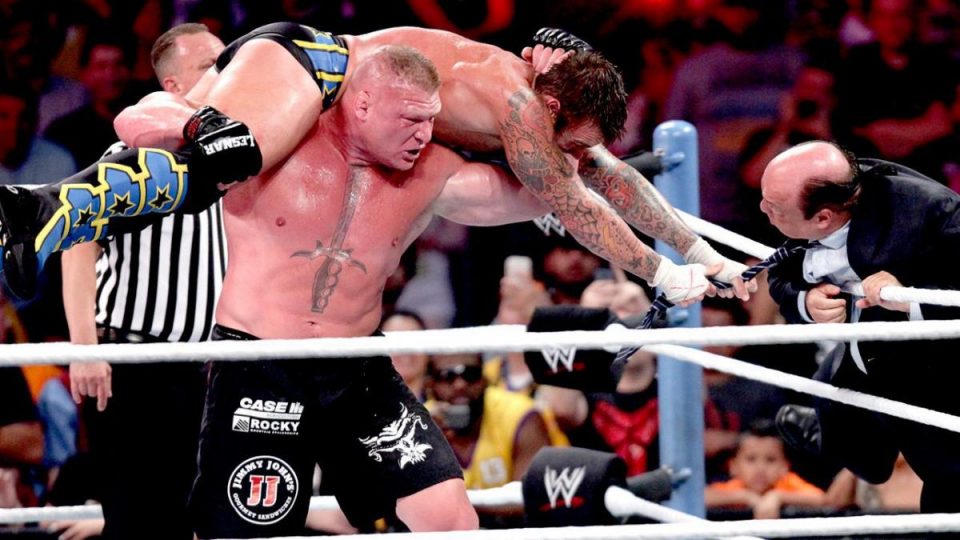 Brock Lesnar versus CM Punk was a match fans dreamt about when Paul Heyman established himself as Punk’s manager during the final months of his 434-day as WWE Champion. It seemed like a complete David versus Goliath type match and that it was, but when you added the aspect of No Disqualification, you knew it could go either way. Lesnar returned to defend Heyman after “The Voice of the Voice of the Voiceless” turned on Punk, signaling that since he didn’t need Heyman anymore, Heyman was going to be the one to get the last laugh. Lesnar came in and destroyed Punk for what felt like months but was really only a few weeks. But that didn’t halt Punk but drove him that much more.

To set the scene, it was SummerSlam. Over a year had passed since Lesnar’s return to WWE and he has established that he was “The Beast Incarnate” all over again. But Punk in his incredible ways made it an even fight. So even that it felt as though Punk would actually walk out as the winner. But alas, it was Lesnar who walked out victorious in what could be considered the most physical match since he returned to WWE. The two men beat the snot out of each other and the only reason Punk failed was that he became so focused on Heyman and took the eye off the ball. Lesnar finished him off with an F5, adding another huge win to his resume. This match remains timeless and has to be in at least the top three of Lesnar’s matches since returning, possibly ever. 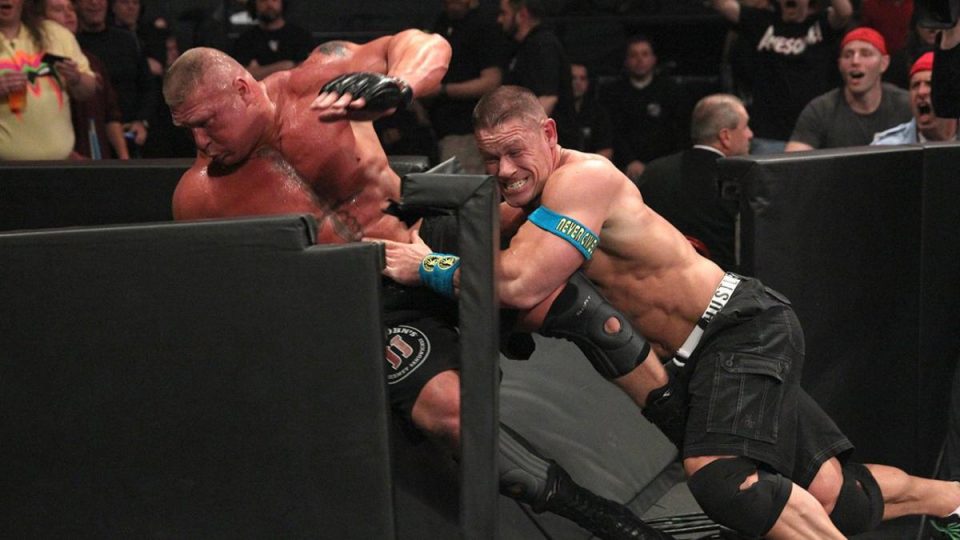 There was something special in the air on a cold Sunday night in Philadelphia in 2015. Brock Lesnar, the most dominant WWE Champion possibly ever, was defending his title against John Cena and Money in the Bank holder Seth Rollins in a triple threat match. The bout was interesting, as it really felt any man could actually leave and only felt like it that much more when things got going. Cena was out to show that the decimation of him by Lesnar at SummerSlam a couple of months prior was a fluke, while Rollins was getting the biggest match of his life and ready to show he belonged with the top dogs in the company.

This match never slowed down once it got started. The only thing anyone could process as they watched it was simple: who would be able to keep both men down long enough to walk out as the winner? Of course, the answer was Lesnar, but that didn’t feel like the case for a lot of the match. Rollins and Cena managed to take Lesnar out at one point, allowing them to take on a major part of the match where it felt the WWE Championship was up to them and only them. Rollins was on the top of his game, as he tended to be pre-knee injury, and Cena was matching him in brilliance. But the moment of the match was when Lesnar came back down to the ring, wrecked everyone, and F5’d Rollins to steal the win and save his title.

One of the best Royal Rumble matches ever. 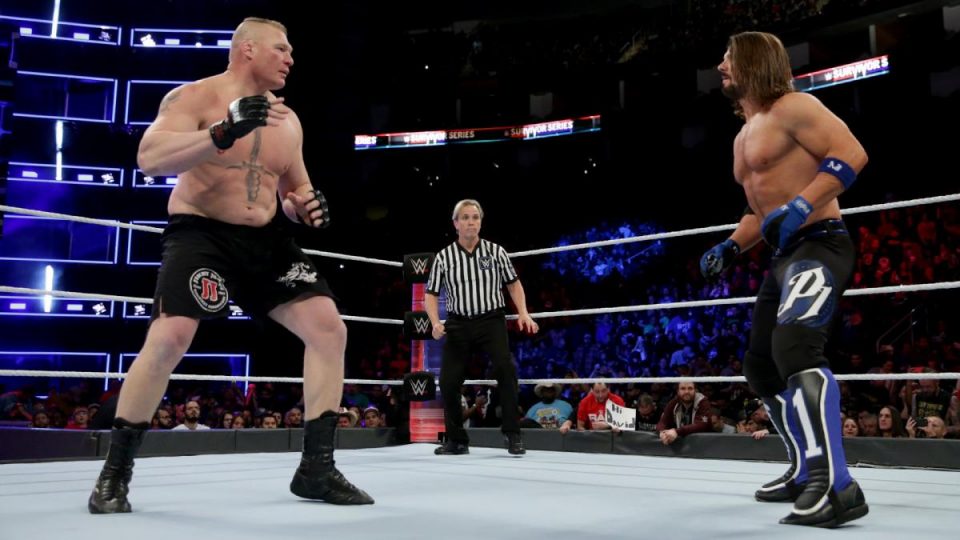 Who would have ever thought that we would live in a world that Brock Lesnar and AJ Styles faced off in a professional wrestling match? That’s why never say never is so real. For the first time ever, the WWE Champion was set to face the Universal Champion at Survivor Series in a Raw vs. SmackDown LIVE match for brand supremacy. Leading up to the event, it seemed as though the fans would be getting WWE Champion Jinder Mahal against Universal Champion Brock Lesnar. But on one crazy night in England, AJ Styles managed to shock the world and change everything by winning his second WWE Championship. And thus, the world was gifted “The Beast” versus “The Phenomenal One.”

The match escaped the car crash, “Suplex City” style that had become Lesnar matches and saw Lesnar have to get down and truly wrestle to defeat Styles. Neither title was on the line, but it was such a big fight feel due to the bragging rights of being the top world champion in the company. Styles gave his best, attacking the leg of Lesnar for the majority and bringing him to the point of nearly tapping out to the calf crusher. Unfortunately for Styles, the power of Lesnar was too much to stop and led to “The Phenomenal One’s” eventual downfall. Lesnar managed to escape victorious, but he certainly earned the respect of Lesnar that night. The match itself was one of the best of the 2010s. 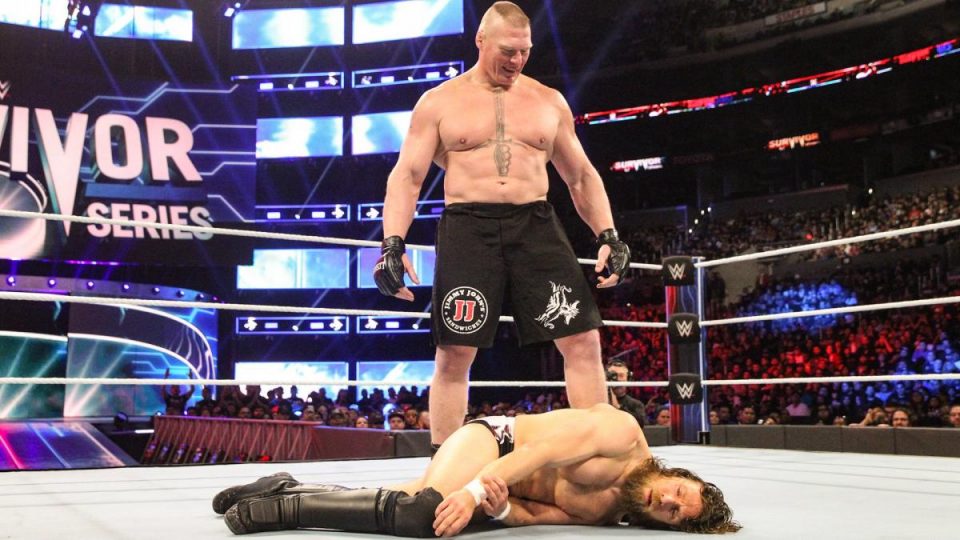 Speaking of dream-type matches, let’s take a look at the final one on the list. Considering Daniel Bryan’s retirement, no one ever thought they would see him take on Brock Lesnar in any type of matchup. Not only did it seem like Bryan was never to get clear, but it just never got to the point of making sense until Bryan had to hang it up. However, the world works in mysterious ways and got to that special matchup one year after the one between Lesnar and Styles. The interesting factor here was it was destined to be Lesnar versus Styles once again, but “The New” Daniel Bryan took his claim just nights before the event and took the WWE Championship from “The Phenomenal One,” setting up the dream match.

What was so magical about this one is that there was no build needed at all to feel special. The only odd aspect was that Bryan was on his way to a heel turn, but had to continue his babyface style against someone like Lesnar. As Bryan had always done in the biggest matches of his WWE career, he never stopped fighting. When it looked like there was no chance, he kept fighting back. At one point, he managed to lock on the Yes! Lock. The crowd erupted as it appeared Lesnar was going to tap out and Bryan was going to beat the odds yet again. But like the year before with Styles, the strength of Lesnar was too much for Bryan to overcome. Lesnar walked out as the winner and so did the fans after one of the best matches of Lesnar’s career.

All of the above matches are available to watch via WWE Network and Peacock.