One of the many wonderful things about the WWE Royal Rumble, apart from the shocking debuts and surprises, is the eliminations.

Over the years fans have witnessed an incredible amount of WWE Superstars get eliminated and lose the chance to headline WrestleMania.

The nature of the Rumble match itself means no one is safe from elimination. Megastars, former champions and WWE Hall of Famers have all been expelled from the match, which only adds to the revere and excitement for the event.

Seeing a competitor launched over the top rope and sent crashing to the floor below is quite a sight but some are way more shocking than the others.

Here are our top 10 most shocking Royal Rumble eliminations.

Royal Rumble 1992 is widely regarded as the best in WWE history. The match had it all and saw Ric Flair steal the show with his amazing 60-minute performance to be crowned the new WWF Heavyweight Championship.

The match featured all of the promotion’s biggest stars from the Undertaker, Randy Savage, Sid Justice and of course the Immortal Hulk Hogan.

It came down to the final three of Hogan, Flair and Justice. Hogan and Justice had been portrayed as friends and looked as if Flair was in big trouble. As the Hulkster and Flair went at it the former WCW man was in a perilous position and teetering on the edge of elimination Justice double-crossed Hogan and tossed him over the top rope for one of the most shocking and surprising eliminations in Royal Rumble history.

One of WWE’s largest most dominant Superstars André was always the favourite to win every time he entered the ring and in 1989’s Royal Rumble that was no different. However, the legitimate giant made it much easier for the rest of the competitors when eliminated himself from the match.

André entered the match at number three and made and eliminated several opponents including Jake The Snake Roberts. The originator of the DDT, upset at the elimination returned to the ring and threw in Damien, his python into the melee.

Everyone in the ring stood aghast at the sight of the huge reptile but André, possibly triggered by an earlier run-in with Roberts and Damien, freaked out and leapt out of the ring to avoid the snake eliminating himself the process.

Charlotte Flair is WWE’s most decorated female athlete. She is a multi-time women’s champion and the favourite to win every time she steps inside the ring. So when she was eliminated from 2021’s Royal Rumble it came as a huge shock.

Flair entered the match at number 15 and made it to the final three alongside Rhea Ripley and Bianca Belair. The two former NXT stars had previous beef with Flair stemming from her NXT Women’s Championship run in 2020.

The two main roster newcomers teamed up to shockingly eliminate Flair from the match signalled a changing of the guard and ushering in a new generation onto RAW and SmackDown. 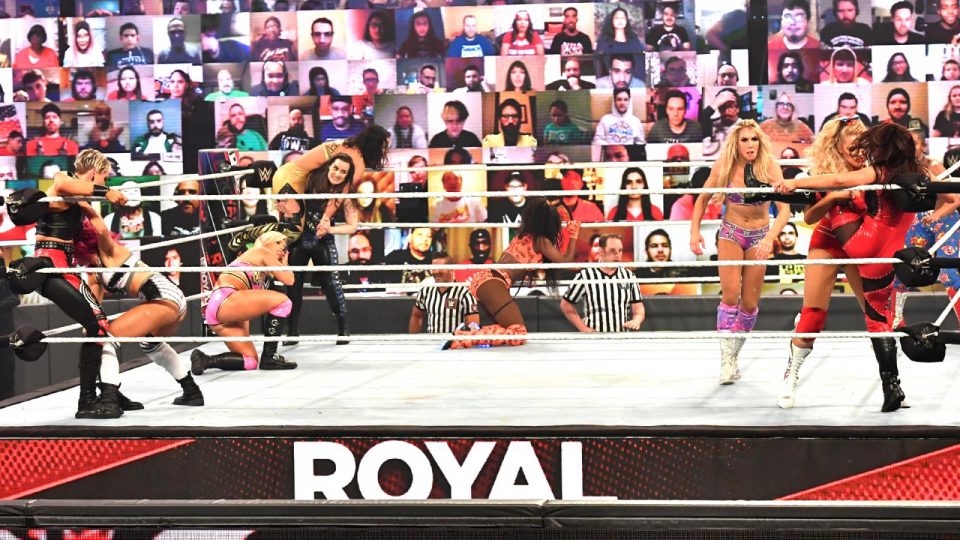 Triple H and Shawn Michaels are synonymous with one another. They are best friends but that didn’t stop HBK from eliminating his DX partner from the Royal Rumble in a shocking moment.

The previous year Michaels had lost to the Undertaker in their all-time classic at WrestleMania 25. Desperately wanting a rematch he knew he had to win the Rumble to challenge Taker for the World Heavyweight Championship at the upcoming ‘Mania.

HBK joined Triple H in the match and the duo dominated by throwing all who remained from the ring. They were then met by John Cena who beatdown DX before attempting an Attitude Adjustment Michaels but Triple H made the save and delivered a Pedigree only to be met by Sweet Chin Music shockingly playing him out of the match.

At the height of the Attitude Era, the feud between Stone Cold Steve Austin and Mr McMahon was one fire. Austin was the bane of McMahon’s life so to ensure that the Rattlesnake would never be WWF Champion again the boss stacked the odds against Austin in the Rumble match having him enter at number one. However, his plan backfired as Commissioner Michaels made McMahon the second entrant giving Austin the chance to dish out some punishment on his adversary.

Austin annihilated McMahon, stomping a mudhole on his ass much to the delight of the crowd. McMahon ran from his attacker taking the assault all over the building, which resulted in Austin getting taken out by the Corporation and sent away in an ambulance.

McMahon returned to the match taking a seat at the commentary table gloating that his Austin problem has been dealt with. Austin returned in the same ambulance that took him away queuing up one of McMahon’s brilliant reactions. Austin stormed the ring and eliminated the Boss Man leaving just McMahon remaining.

As McMahon begrudgingly entered the ring, The Rock came to ringside distracting Austin allowing the Chairman to bundle him over the rope for a shocking elimination.

1995’s Royal Rumble not only featured one of, if not the best elimination escape of all time, but a shocking elimination too. The match is known for Shawn Michaels’ heroic performance in which he entered at Rumble as the first entrant and outlasted the twenty-nine other Superstars to win, but that wasn’t nearly the case.

The British Bulldog Davey Boy Smith, who came in as the second entrant also made it to the final two. Bulldog tossed Michaels about the ring, who sold brilliantly, before taking a heavy clothesline over the ropes and seemingly to the floor. However, as Bulldog celebrated, HBK incredibly managed to hang onto the ropes and with his feet dangling perilously close to the mat before climbing to safety and shockingly throwing Bulldog out for the win.

That year’s Royal Rumble match is one of the most famous versions of the event in WWE history as it continued to launch Stone Cold Steve Austin into the stratosphere.

Austin was on the biggest name in the business and rising through the ranks at an alarming speed. His arrival in the Rumble as the fifth entrant resulted had a tremendous run where he eliminated multiple opponents allowing him to stand alone for long stretches at a time.

Austin reached the final five but Hart threw him out of the ring. However, a brawl involving Terry Funk and Mankind occupied the referees outside therefore missing the Rattlesnake’s elimination. This allowed Austin to re-enter the fray and eliminate the Undertaker and Vader, while Hart tossed out Diesel. The Hitman celebrated his victory unaware of Austin’s presence, was then launched over the top rope and to the floor below as the fans cheered and gasped at the simultaneously.

That year’s Royal Rumble match is a highly enjoyable watch because Brock Lesnar enters at number one and proceeds to throw out anybody and everybody who enters thereafter.

The sight of Lesnar dispatching the likes of Big E, Keith Lee and Braun Strowman with aplomb was brilliant and like nothing seen in WWE before since Austin’s iconic wristwatch checking scene in 1997.

Enter Drew McIntyre, the man on a collision course with Lesnar at the time, blew the roof off the building when he sent the Beast flying out of the ring with a perfectly executed Claymore kick, as the crowd roared with excitement McIntyre stared down Lesnar sealing a shocking and emphatic Royal Rumble elimination.

In the mid-2010s Daniel Bryan was the most over WWE Superstar in the company. Fans online and in attendance rallied behind Bryan so fiercely the promotion, despite their efforts, could no longer ignore.

In 2014 Bryan reached the pinnacle of WWE at WrestleMania 30 when he defeated Triple H, before beating Randy Orton and Batista to become the WWE Champion. Fan support remained strong after he had to relinquish the title due to injury a few months later. Upon his return ten months later the WWE Universe welcomed him back with open arms and wished for him to pick up where he left off and get back to the main event level ad the Royal Rumble was the quickest way to get there. However, WWE had other plans.

The match saw Bryan enter at number ten with many fans yearning for him to go all the way and back to headline WrestleMania. But he would only last eleven minutes before being eliminated by Bray Wyatt to thunderous boos and jeers from the fans in attendance and all around the world.

Long before Reigns reigned supreme as the Tribal Chief he was WWE’s obvious “chosen one” and the fans rejected his blatant push to the top of the card and ultimately the WWE Championship. In true WWE fashion the company stuck to their guns and continued to push him to the moon.

At Survivor Series 2015 Reigns won his first WWE World Heavyweight Championship but lost it almost instantly when Sheamus cashed in his MITB briefcase to take the title from him. Reigns won the title back on Monday Night RAW some weeks later much to chagrin of The McMahon’s and Triple H, The Authority so they booked him to defend his championship in the Royal Rumble match and as the very first entrant.

With insurmountable odds stacked against him, Reigns fought valiantly but was taken out of the match from an outside attack courtesy of the League of Nations. He returned to match before Triple H made his return to action at number 30.

Triple H went on a tear eliminating two opponents in quick succession. As the final four of Reigns, Sheamus, Triple H and Dean Ambrose remained the champ took out Sheamus with a Superman Punch only for Triple H to eliminate Reigns straight after guaranteeing a new WWE Champion would be crowned in a shocking elimination that sent the crowd wild.

The Undertaker was the biggest and meanest dog in the yard. Under his Big Red/Deadman Inc persona, in which he portrayed a more real-life version of himself, he was faster, stronger and even more dangerous.

Taker entered the Rumble match at number eight and true Deadman fashion dominated from the get-go eliminated Goldust, Al Snow, Rikishi, Billy Gunn, Matt and Jeff Hardy in quick succession. The Hardy Boyz and Lita attacked the Undertaker but suffered a second elimination for their efforts, which allowed entrant eleven and recent Tough Enough winner Maven to deliver the most shocking Royal Rumble elimination of all time.

Maven possessed a knack for delivering a beautiful dropkick, which is exactly what he did. The force of the move launched the Deadman out of the ring and tumbling to the mats outside. As the crowd gasped and Maven celebrated the Undertaker looked on in shock before re-entering the ring and absolutely destroying the newcomer.