With people consuming videos online in ways like never before, many WWE matches have been viewed over a hundred million times, so now we discover the 10 Most Viewed WWE Matches On YouTube!

There are an endless number of videos on WWE’s YouTube channel which itself currently boasts over 87 million subscribers. Many of these videos are of segments and interviews with some reaching over 200 million and one video, in particular, storming to 300 million views.

That video is entitled ‘Randy Orton makes it personal with Triple H’ and shows The Viper kissing a knocked-out Stephanie McMahon while her husband Triple H watches on helplessly as he is handcuffed to the ring ropes.

But what about actual WWE matches? Which bell to bell encounter has been viewed the most times on YouTube? Well, it’s not The Deadman facing The Beast. 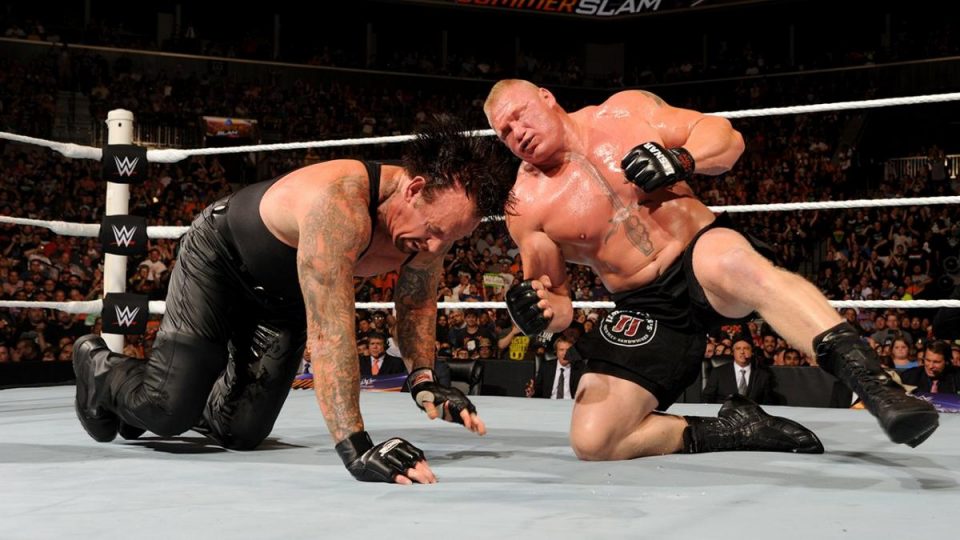 Starting off the list with a coveted “full match” as The Undertaker resumed hostilities with Brock Lesnar at SummerSlam in 2015.

Of course, any encounter between Lesnar and the WWE Hall Of Famer will always be overshadowed by their match at WrestleMania 30 which saw The Conqueror end The Streak. By 2015’s SummerSlam however, The Undertaker was rejuvenated after a victory over Bray Wyatt at WrestleMania 31 and was looking to exact revenge on Brock Lesnar.

This SummerSlam bout is best remembered for the incredible moment that saw The Undertaker sit up in classic fashion and share a maniacal laugh with Lesnar before the two men began reigning down monstrous blows on each other once again. 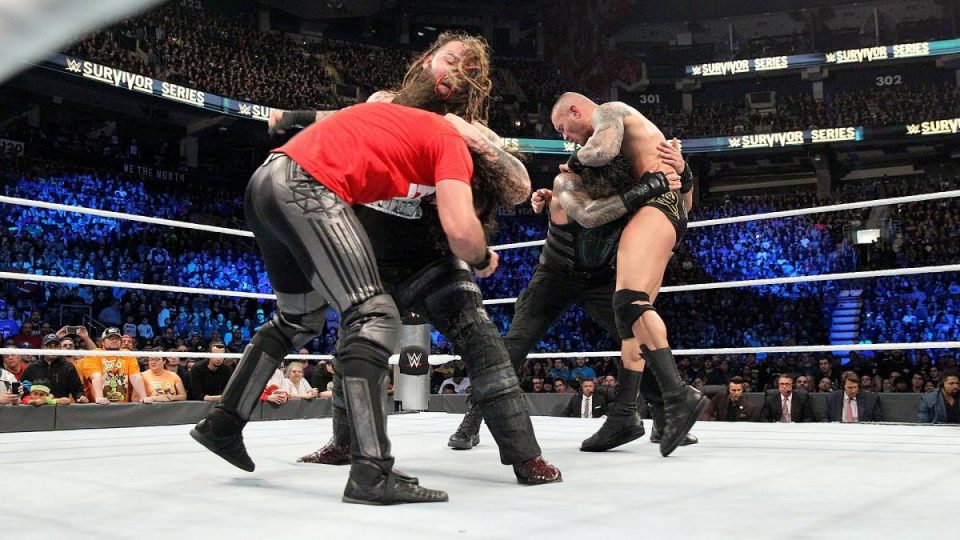 In rosters from what might as well be another century given how the landscape of wrestling has changed in recent years, Raw’s Kevin Owens, Braun Strowman, Roman Reigns, Seth Rollins, and Chris Jericho faced the blue brand’s AJ Styles, Dean Ambrose, Bray Wyatt, Randy Orton, and Shane McMahon. For those counting 50% of the match are still with WWE, 40% have definitely left the company and the last 10% is Shane McMahon.

SmackDown picked up the victory as Wyatt and Orton – partners at the time – survived with Bray Wyatt picking up a huge, defining win over Roman Reigns. And we know how that worked out for both men… 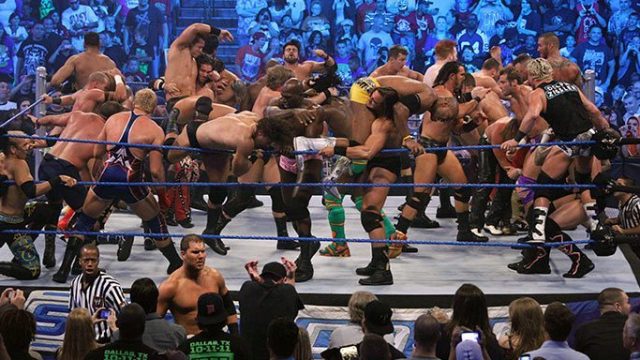 Those viewers that survive the first two minutes of this video and get to the end of a Theodore Long and John Laurinaitis double act are rewarded with a huge Battle Royal that took place on SmackDown in 2011 with the winner receiving a championship match of their choosing.

A who’s who of the WWE locker room shared the ring with a who’s who of “who on Earth is that?” as all 41 stars crowded the ring. Randy Orton emerged victorious and part of this video’s appeal – other than getting to briefly see Yoshi Tatsu – is we also get to see Orton make his challenge for later in the night as he tells the world he’ll face Mark Henry for the World Heavyweight Championship, and that match itself.

With Orton in control late on, Cody Rhodes interrupts proceedings to cause the disqualification in the main event. With Rhodes and Henry beating down Orton, The Big Show runs down to make the save with he and Orton standing tall at the end of the night. 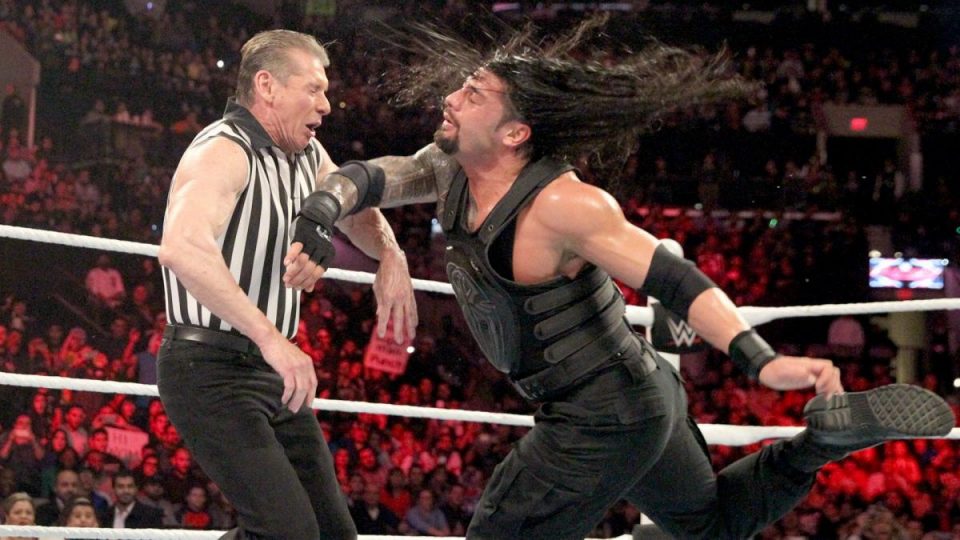 At the beginning of 2016, Roman Reigns was the WWE World Heavyweight Champion but nowhere near yet being acknowledged as The Tribal Chief. Sheamus was The Authority’s hired gun in this match on Raw as they sought to wrestle the title from around The Big Dog’s waist.

The video of this match for the championship on Raw joins the battle in progress and perhaps the sizable number of views has something to do with the special guest referee for the bout – WWE Chairman Vince McMahon.

It doesn’t take long for McMahon’s plan to become apparent as he refuses to count for Reigns but counts quickly for Sheamus. Reigns clocks the Chairman with a Superman Punch before Stephanie McMahon appears to make her point to the champion which leads to Reigns throwing papa McMahon into his daughter.

Reigns survives everything The Authority throws at him to escape with his title before McMahon tells him he’ll be defending the championship once again in the 2016 Royal Rumble match. 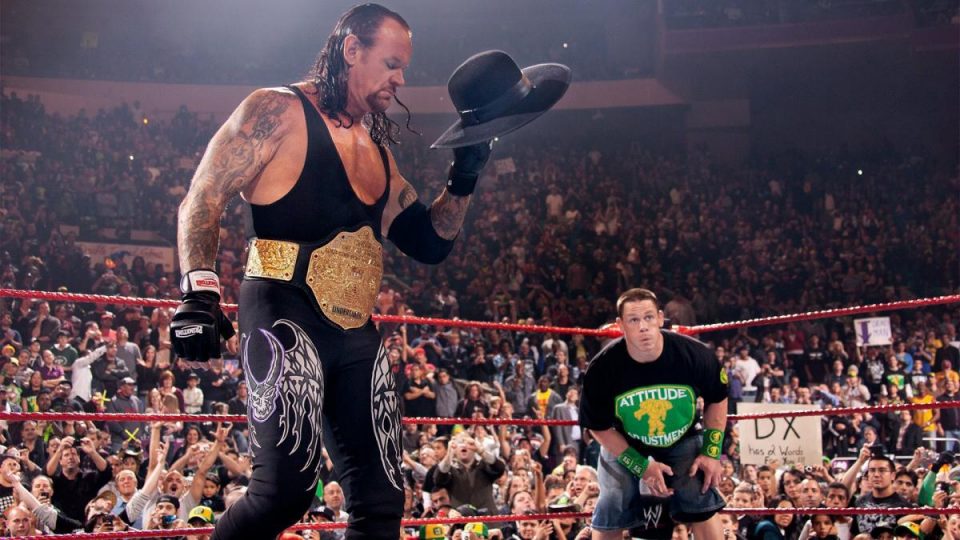 A match absolutely overflowing with top tier talent can only get to sixth place on this list and World Heavyweight Champion The Undertaker teamed with WWE Champion John Cena to take on Unified Tag Team Champions The Big Show and Chris Jericho and the WWE Hall Of Fame team of Shawn Michaels and Triple H inside Madison Square Garden.

The background to the match was that at Survivor Series – just a week away – The Undertaker had to defend his title against Jeri-Show in a Triple Threat match while Cena had to do the same against DX. On Raw, however, the two champions came out on top with Cena pinning Triple H with an Attitude Adjustment. Following the win, The Undertaker immediately took out Cena with a Tombstone. 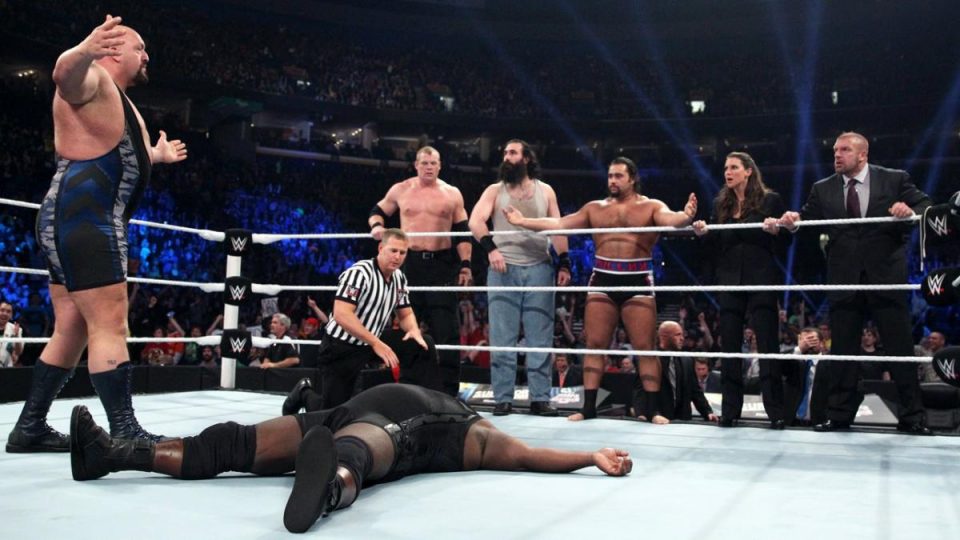 One of the finest Survivor Series main events of recent times and Dolph Ziggler’s finest hour have been viewed an incredible 123 million times.

Cena led his band of brothers into battle against The Authority’s hired guns with the caveat that if Cena’s team won then the double-headed monster of Stephanie McMahon and Triple H would be ousted from power. Cena was dealt a devastating blow when The Big Show turned on his team – a shock to many I’m sure – and KO’dthe sixteen-time champion of the world.

That left Dolph Ziggler with the unenviable task of having to overcome Luke Harper, Corporate Kane, and Seth Rollins – which he somehow did thanks to some unlikely help. That’s right. IT’S STING!!! The Icon of WCW made his presence felt and shocked the world by making sure Triple H’s interference was nullified allowing Ziggler to pin Rollins for the win almost a full six minutes after Rollins was hit with the ZigZag. 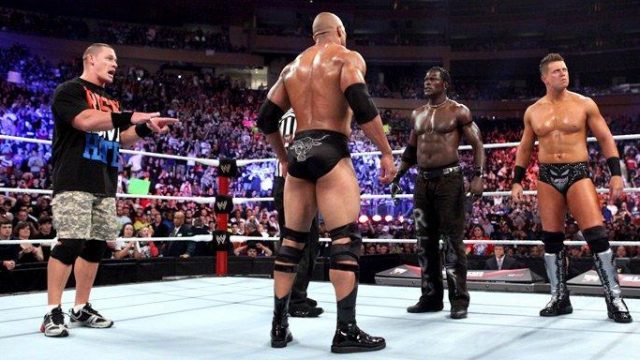 Never before. Never again. No, not R-Truth headlining a WWE pay-per-view, stop it. But rather the team of WWE icons and rivals John Cena and The Rock.

This match headlined Survivor Series in 2011, a time when The Awesome Truth was causing mayhem in WWE, feeling that they were the victims of a conspiracy. And while many Miz and R-Truth fans surely make up some of the 125 million views this video has, it’s highly likely the majority of them have come to see the first WWE match in seven years of The Rock.

Cena and his partner first fell foul of each other at the main event of that year’s WrestleMania, coincidentally when The Rock helped The Miz defeat Cena to retain his WWE Title. That set up a showdown between Rock and Cena at WrestleMania 28 but before that John Cena turned to his future opponent while looking for a tag team partner to end the shenanigans of The Miz and R-Truth.

The Rock reluctantly agreed as WWE played the “can they co-exist card??” to the extreme. The Rock picked up the win for his team before dropping Cena with a Rock Bottom to end the night. 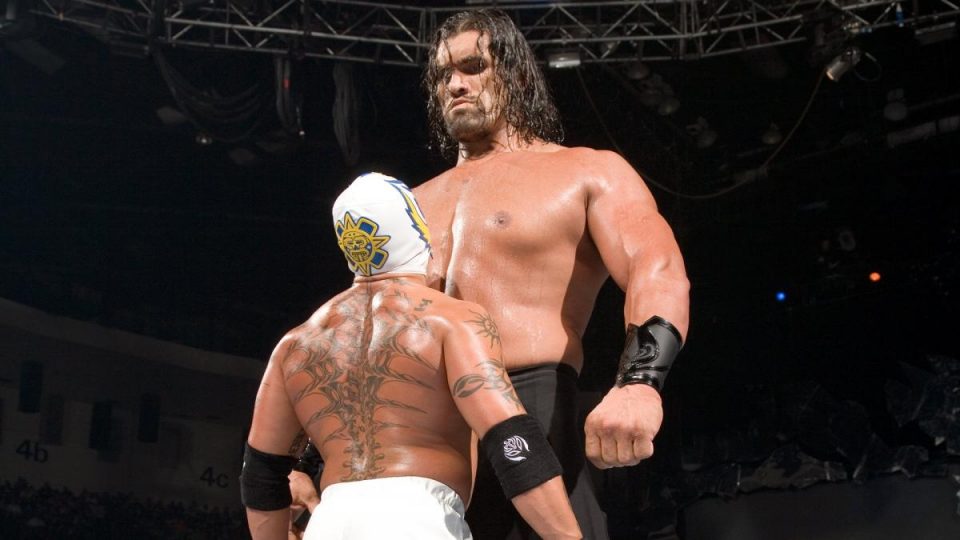 In just The Great Khali’s third appearance in WWE, he took on then-World Heavyweight Champion Rey Mysterio in a non-title match on SmackDown.

Given the obvious size difference and the massive push Khali received early in his WWE career, the giant Indian dominated his much smaller opponent. A sneering JBL who was embroiled in a feud with Mysterio for his gold at the time jeered Rey from the announce table to the extent that this video is best enjoyed on mute.

JBL interfered, attacking Mysterio behind the referee’s back, helping Khali – not that he needed any help – pick up an ultra dominant win. Mysterio’s humiliation was compounded when The Great Khali pinned him by stepping on his face. 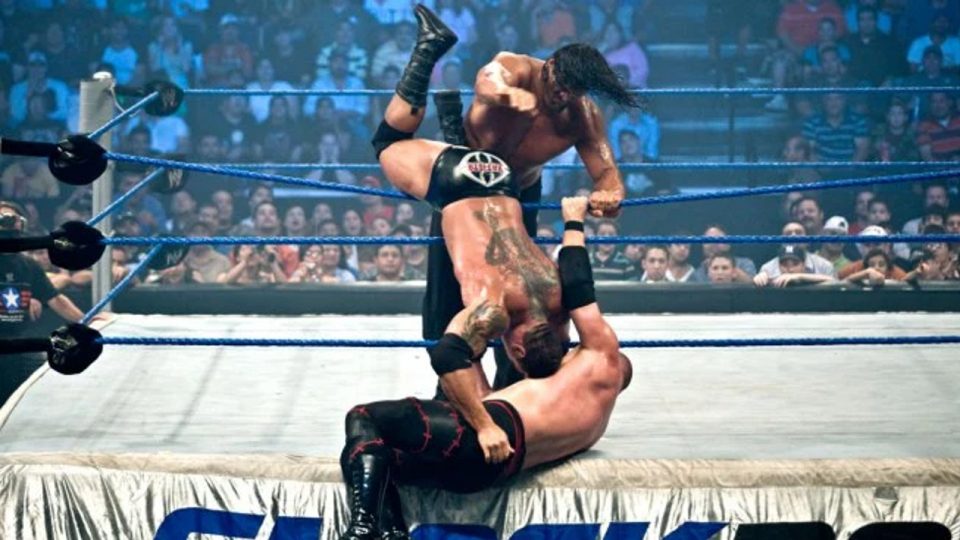 Another SmackDown match in second place on the list and another Great Khali victory, this time for championship gold.

In July 2007 Edge was forced to vacate the World Heavyweight Title due to injury leading to this wild Battle Royal on SmackDown to crown a new champion. Twenty WWE Superstars entered but only Batista, MVP, Finlay, The Great Khali, and Kane received televised entrances so we can narrow the field down to five potential winners.

With the match down to the final three of Kane, Batista, and Khali, the giant picked his spot as both Kane and Batista grappled on the ropes allowing The Great Khali to eliminate both men and become the first Indian World Heavyweight Champion. 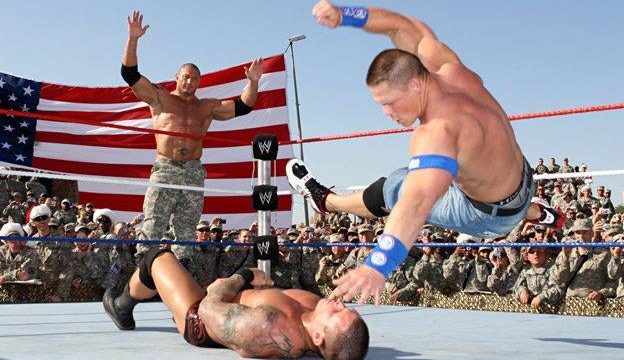 It’s not a WrestleMania main event, or one with a major stipulation that tops the list of most-viewed WWE matches on YouTube, but rather a star-studded six-man tag team match from 2008’s Tribute To The Troops.

Six of WWE’s finest put on a match in the heat of Iraq as they entertained the troops in Camp Victory as part of WWE’s annual salute to the US military.

The entrances take longer than the match itself with the good guys picking up the victory to send the troops home entertained and happy. Cena picked up the win for his team as he delivered an Attitude Adjustment to Orton as Batista delivered a Batista Bomb to Chris Jericho, with both men making simultaneous pins.