With the release of DC League Of Super Pets, it’s probably a good time to look at some of Pro Wrestling’s favourite animal friends

Being a wrestling fan is quite the emotional rollercoaster at the moment. For better or for worse, the times they are a changing. It seems not a day can go by without another headline filling us with either joy or disappointment.

So how about we take a break from all the allegations, injuries, retirements, comebacks, forbidden doors, and special announcements by looking at some cute animals?

During the outlaw days of pro wrestling, there would be all kinds of carnie bouts between man and beast, including lions, tigers, and bears (oh my). Thankfully those days are long behind us. At least in mainstream sports entertainment.

This list is more about the animal mascots and sidekicks that have entertained us over the years. Some were one-offs, some were full-on pets, some were well treated and others, sadly not so much.

Whether it’s a cute doggo or a creepy reptile, a humungous equine or a teeny tiny rodent, having a beastie bestie can really add a little flavour to a wrestler’s persona.

Mankind And George The Rat

Before Mr. Socko, before The Rock, heck, even before Al Snow, Mankind had another best friend; George The Rat.

During his early days in the WWF Mick Foley’s deranged character would cut promos from a darkened boiler room whilst holding his rodent friend. The two would discuss a variety of topics from Foley’s ear, what is considered “normal” and the existence of God.

It’s a shame podcasts weren’t around back then, because Mick N George In The Boiler room would no doubt be a top download.

George actually belonged to Jim Cornette, who used to take the little fella on the road with him. According to multiple sources, George also had tremendously huge balls. Do with that information what you will.

Of all the silly ideas late WCW had, bringing a live adult man-eater out into an arena full of people has to be up there with the best of them.

On the October 23rd edition of Nitro from 2000, Scott Steiner (who else) did just that.

A combination of screaming fans, plus Steiner’s entrance theme which was pretty much just a siren and a drum beat, visibly annoyed the tiger, and it clearly wanted to be anywhere else other than the Nitro arena (like most WCW fans in the late 2000s) as it tugged on the rope of its trainer and Steiner.

According to Big Poppa Pump, the feline tried to have a swipe at Rey Mysterio, who was dressed in Zebra stripes backstage.

But the best part? When cutting a promo to Booker T about their upcoming match at Halloween Havoc, the tiger wasn’t mentioned once. Steiner just wanted to drag a dangerous cat monster to the ring for apparently no reason, which to be fair, is a very Scott Steiner thing to do.

Undertaker has always been known for making an entrance, and Wrestlemania IX was no exception.

For his five-star, career-defining match-up against Giant Gonzales, Taker made his way out with a bird of death by his side, creating at least one cool image for what some would call the worst Wrestlemania of all time.

Sadly, the vulture didn’t wear a little Undertaker hat, as that would be deemed far too awesome.

Shout out to Sting, who was also known to hang out in the rafters with a vulture from time to time. 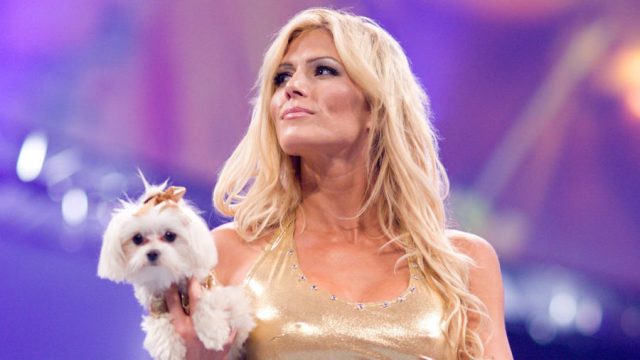 In the mid-noughties, it was customary for famous socialites to make their way around parties with a toy breed dog in their bag.

It was the same for WWE’s blonde bombshell Torrie Wilson, who would make her way to the ring with her adorable Maltese named Chloe.

Chloe would be a “Superstar” in her own right, earning herself her own action figure and biography on the WWE website.

After retiring from in-ring action, Chloe enjoyed a long and happy life with her Torie, before sadly passing on in 2020. Her death even made mainstream news, proving what a beloved little bugger she was. 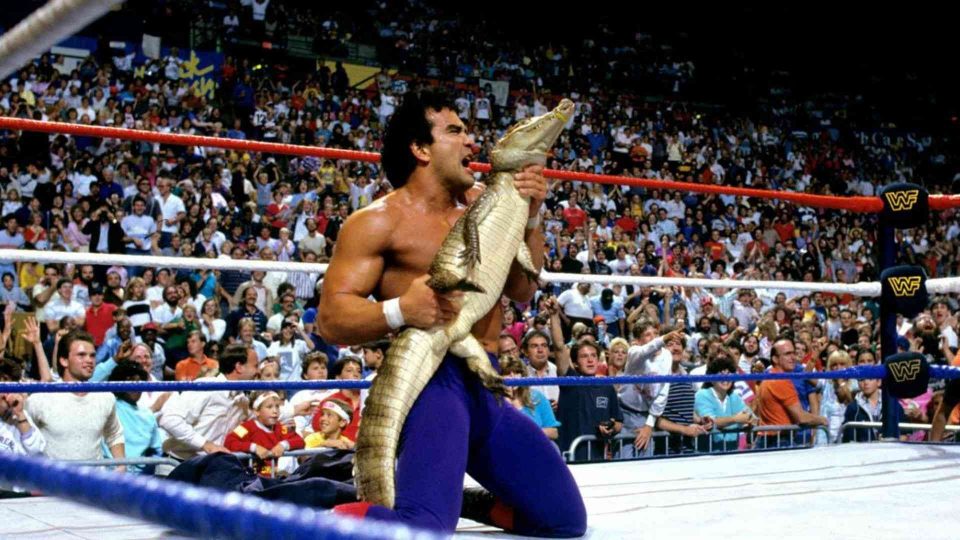 When Ricky Steamboat joined the WWF in 1985, he was given the nickname “The Dragon” and the rest was history.

He would even come out with a dragon. Kind of.

Sometimes Steamboat would pose with a Komodo Dragon for promotional photo shoots, but for the vast majority of live appearances, it was other types of reptiles, as Komodo dragons are famously dangerous and illegal to keep as pets.

When battling the venomous Jake “The Snake” Roberts and his slithery friend, who we will get to later, a baby crocodile was used to put on its best dragon impressions, where Ricky and Jake would wave their scaled mascots at each other like some kind of deranged live action Pòkemon show. 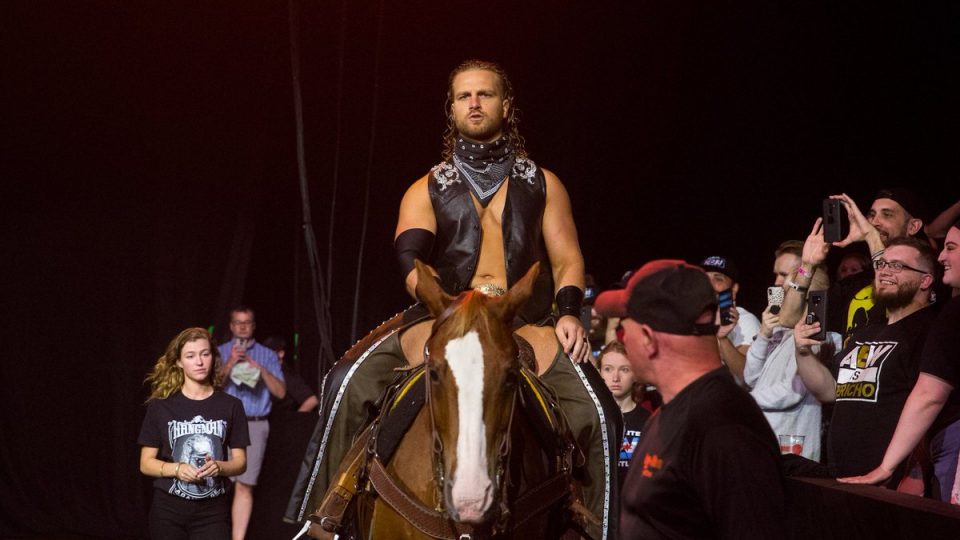 When you mention the word horse, the first wrestler that pops into your head has to be Hangman Adam Page.

Well actually, it’s probably Terry Funk, after getting kicked by one during a match with Chris Candido, talking to one’s backside whilst cutting a promo on Eddie Gilbert, and using another’s ill health as an excuse for no showing WWF events.

Page likes to get up to all sorts of cowboy sh*t, and nothing says cowboy sh*t more than a trusty steed.

His most famous ride is probably Hunter Horse Helmsley, who he rode out to the ring during his entrance at the inaugural All Out in 2019.

Sadly Hunter left us for that big ranch in the sky a few months later, but Page still likes to ride from time to time, probably most notably chasing Sammy Guevara about during the first Stadium Stampede. 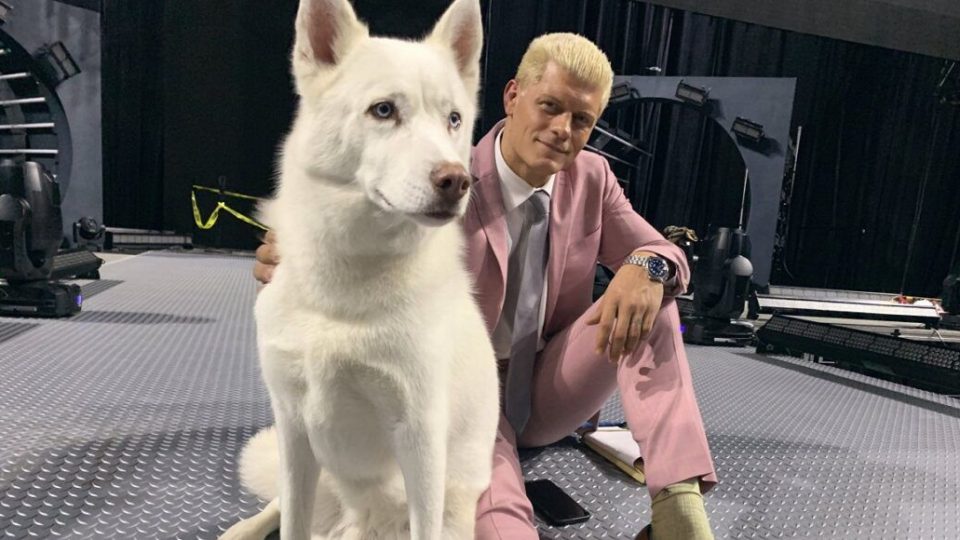 Pharaoh used to accompany his master to the ring on many an occasion, but like Hunter Horse Helmsley, made his last public appearance at All Out 2019 after being spooked by pyro during Rhode’s Star Trek Themed entrance.

Still, the Siberian Nightmare is still very much in the public eye, being interviewed by Alicia Tout and keeping up appearances on the Rhodes Family Socials, along with his adorable Pomeranian stepbrother Pinkerton.

Koko B. Ware’s Frankie The Parrot 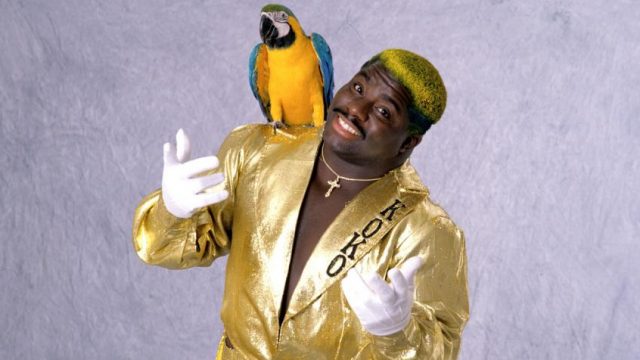 In 1986 Koko B. Ware started calling himself the birdman, inspired by watching Morris Day and The Time in the Prince movie Purple Rain, where they did the bird dance.

Koko’s wife taught him how to perform those sweet moves, he put birds on his tights, and a gimmick was born. WWF soon signed B. Ware and gifted him with the final touch, a parrot named Frankie.

Frankie and Koko were super over during the 80s, and the blue and yellow Macaw would accompany them everywhere, taking residence in Koko’s home.

This story, however, has a sad ending, as Frankie died during a house fire in 2000.

The British Bulldogs and Matilda 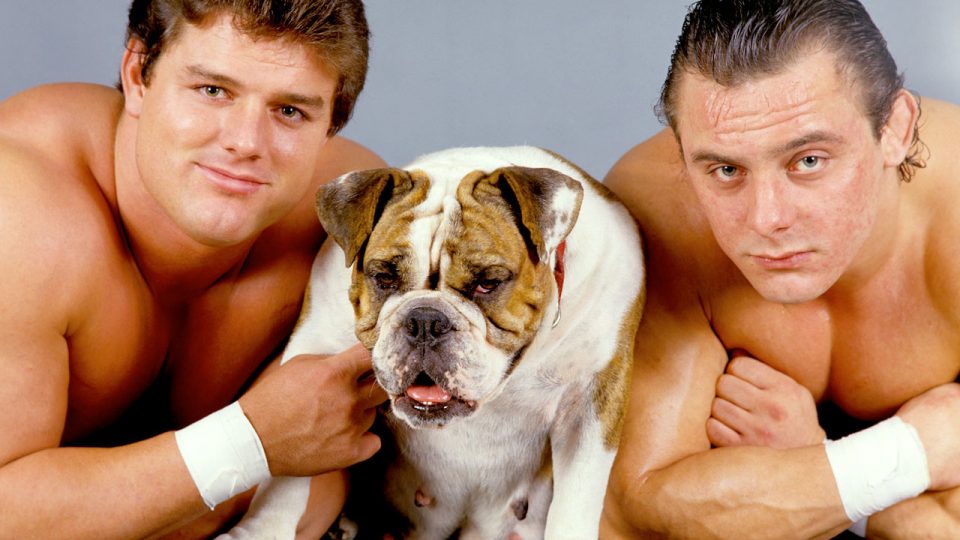 In 1986 The British Bulldogs would debut a third member of their faction, an actual bulldog named Matilda.

Matilda’s biggest angle was probably when she was kidnapped by the Bobby Heenan-managed islanders.

After chasing Heenan out of the ring in a comical fashion before a 1988 match-up between the two teams, the ref forced Matilda to stay on a platform for the remainder of the bout.

Towards the end, Heenan, Haku, and Tama grabbed the beloved mutt and made a run for it. 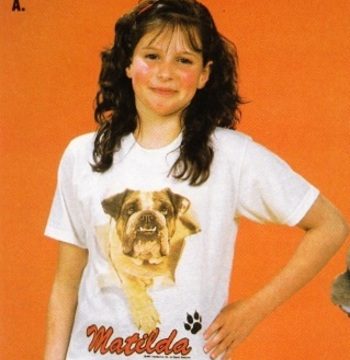 Matilda had her own plushie. A shirt (seen here modeled by Stephanie McMahon), and numerous figures, the most recent being included with Davey Boy Smith as part of Mattel’s Elite line of toys.

Jake The Snake and Damien 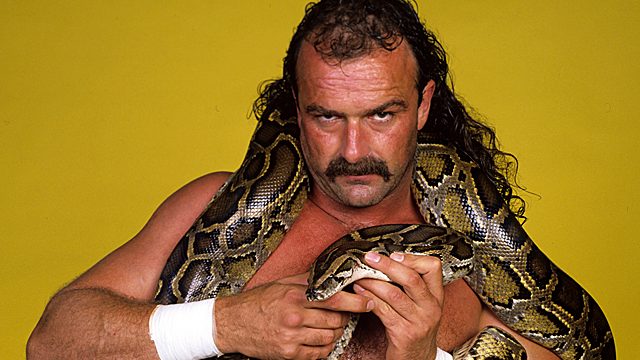 Jake Roberts hated snakes. So imagine his disdain when, as seems to be the fashion in mid-’80s WWF, they decided to give him a snake gimmick complete with a 100ibs python!

Jake would have to lug the large beast around with him everywhere, as well as all his gear, which brought him much aggravation, but it paid off and Jake The Snake Roberts became a household name.

Many snakes played the Damien gimmick, and from countless tales of them escaping and going mad in arenas, airports, and DDP’s house they didn’t have the best quality of life.

Damien would meet his kayfabe end by being crushed by Earthquake, which led to his replacement, Lucifer, and Macho Man chomping King Cobra.

Jake preferred carrying the more vicious Cobra, purely for carry weight alone (I suppose a snake’s personalities don’t really come into the “favourites” equation much) but for most of us when we think of Robert’s it’s with the massive python named after Satan’s kid draped around him.

As we progress into a more and more animal-friendly society, animal gimmicks and mascots appear to be left in the past, and quite rightfully so.

Still, it’s fun to reminisce when the circus known as pro wresting would delight fans with a variety of beasties of all shapes and sizes. At least we’ll always have the action figures!