Last year’s WrestleMania is set to see a major global attraction make his WWE in-ring debut when rap megastar Bad Bunny faced off against two-time WWE Champion The Miz in the latest of many celebrity appearances on the Grandest Stage of Them All.

However, the Puerto Rican rapper, singer and songwriter – whose musical achievements include being the most-streamed artist on Spotify in 2020 with 8.3 billion streams and the most-streamed album – isn’t the first world-famous icon to make their mark at the Show of Shows, with WrestleMania playing host to the likes of fellow musicians Liberace, Motörhead, Limp Bizkit, Flo Rida and even former President Donald Trump. In fact, going back to the first-ever WrestleMania, the tone was set when Muhammad Ali, Liberace and Cyndi Lauper rocked up at Madison Square Garden, New York, on March 31, 1985, to sett the standard and bridge the gap from professional wrestling into mainstream entertainment!

Following a chaotic in-ring debut at Royal Rumble earlier this year, this yea’s Show of Shows sees Jackass star Johnny Knoxville return to the ring with VENGEANCE in his match-up against Sami Zayn, who recently crashed the “Jackass Forever” Red Carpet Premiere where he had to be removed with force.

So, who are the 10 biggest stars to appear at WrestleMania?

The Prince of Darkness, Black Sabbath frontman Ozzy Osbourne rocked up at WrestleMania II, wearing a blazer that would make Mark Henry proud when he appeared on the sabbath at the Show of Shows.

Across his career, Ozzy Osbourne’s total album sales from his years in Black Sabbath, combined with his solo work, amount to over 100 million. The band sales aren’t exactly doing the heavy lifting for that statistic either, with Ozzy’s solo career seeing him releasing 12 studio albums, the first seven of which received multi-platinum certifications in the US.

In April 7th, 1986, Osbourne appeared at Nassau Coliseum in New York, accompanying fellow countrymen The British Bulldogs for their clash with The Dream Team. Lou Albano was also ringside for the final match of the Chicago portion of the twin-venue Show of Shows. The main event saw The British Bulldogs – Davey Boy Smith and Dynamite Kid – end the seven-month reign of Greg Valentine and Brutus Beefcake. 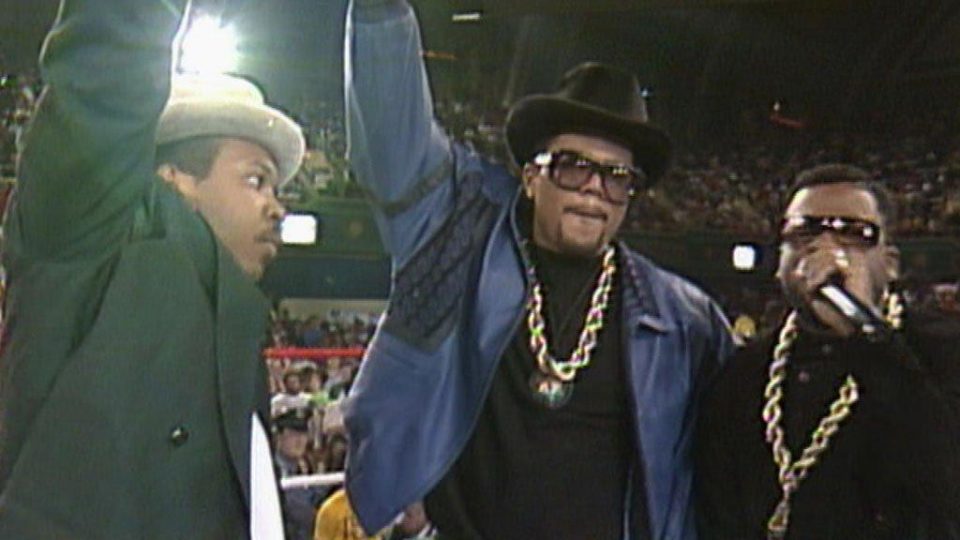 While there have been many musical performances at WrestleMania, the appearance of Run-DMC at WrestleMania V was pretty special – with the group performing a song they created specifically for the Show of Shows!

On April 2, 1989, Run-DMC hit Trump Plaza in Atlantic City, New Jersey, as the first rap group to receive a Grammy Award nomination were one of a troupe of special guests – with Donald Trump and Morton Downey Jr also appearing on the show. WrestleMania V was main-evented by a WWF World Heavyweight Championship match between Hulk Hogan and ‘Macho Man’ Randy Savage in a colossal clash dubbed ‘The Mega Powers Explode’ with Rick Rude and Ultimate Warrior also going one-on-one for the Intercontinental Championship.

Despite no longer being active Run-DMC is widely regarded as one of the most influential acts in the history of hip hop music, innovating the relationship between MC and DJ. Run-DMC was also the first hip hop act to have their music videos broadcast on MTV and to be on the cover of Rolling Stone. 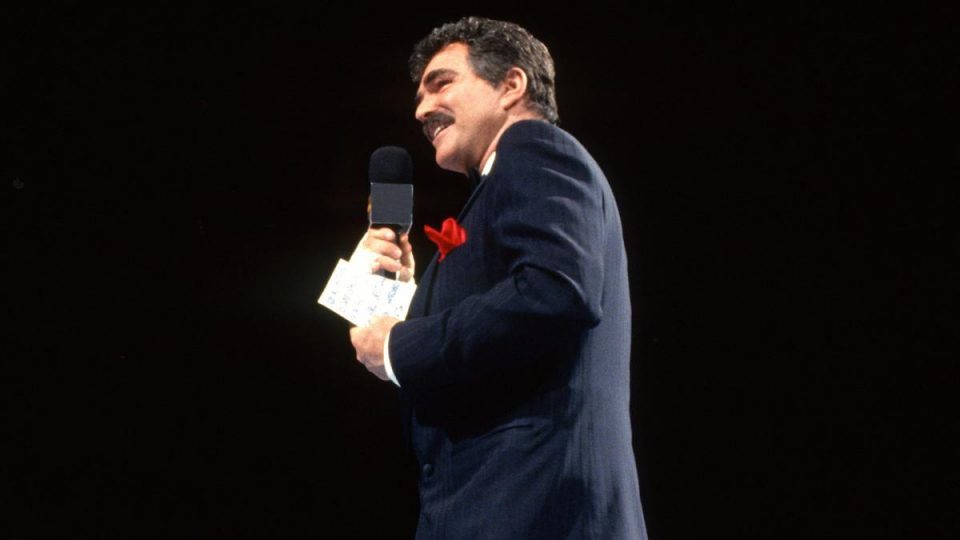 The late Burt Reynolds sadly passed away in 2018 at the age of 82, with WWE paying tribute and Bret Hart recalling a recent meeting with the Hollywood icon who was a part of his WrestleMania main event in 1994.

The Hitman noted how he thanked the Longest Yard star for his role as a ring announcer for the WWF Championship match between Hart and Yokozuna at WrestleMania X, in Madison Square Garden, New York – noting that Reynolds was a “real fan” and a class act. It was the second match of both men, with Yokozuna also being challenged by Lex Luger, while Bret Hart was defeated earlier in the evening by his brother Owen, which led to a lengthy rivalry between the pair following the Show of Shows.

The Academy Award-nominated Burt Reynolds starred in over 50 feature films, including Smokey and the Bandit, The Cannonball Run and Boogie Nights. 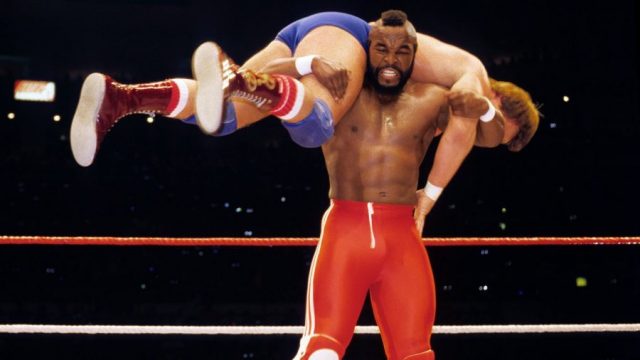 Appearing – and competing – at both the inaugural and second WrestleMania events, Mr T well and truly etched his name into WWE’s history books.

On March 31st, 1985, the A-Team star teamed up with The Immortal Hulk Hogan as the team defeated the team of ‘Rowdy’ Roddy Piper and ‘Mr Wonderful’ Paul Orndorff at Madison Square Garden. The very next year, on April 7th, 1986, Mr T returned to the Show of Shows at Nassau Coliseum in New York, squaring off with Piper in a boxing match – which also had a fellow celebrity as a judge in jazz singer Cab Calloway.

Mr T – whose boxing match threw back to his Clubber Lang role in Rocky III – has since been inducted into the WWE Hall of Fame, with Gene Okerlund making it official before soon-to-be Hall of Famer Kane interrupted the speech of the Hollywood star. 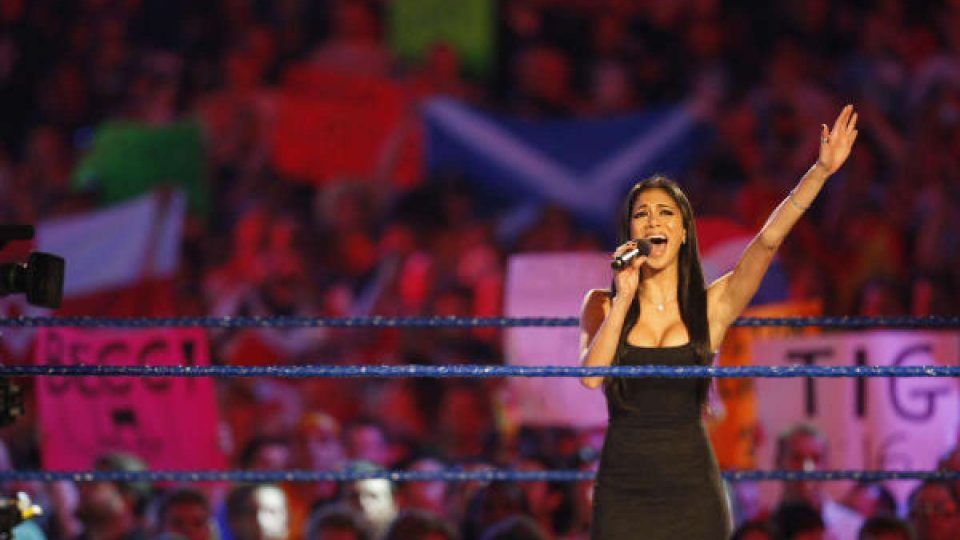 WrestleMania wouldn’t be WrestleMania if it wasn’t opened with America The Beautiful, and many, many massive names from the world of music have performed their own renditions of the iconic song to kick off the Show of Shows.

From Aretha Franklin to John Legend, the list goes on. However, when you talk about celebrities with mainstream appeal, Nicole Scherzinger of the Pussycat Dolls’ appearance at WrestleMania XXV is up there with the most surprising. Belting out the anthem, which has always been favoured in WWE to the official national anthem, Scherzinger kicked off one of the most historic WrestleManias on April 5th, 2009, at the Reliant Stadium in Houston, Texas, with Shawn Michaels vs Undertaker – widely regarded as one of the greatest wrestling matches of all time – taking place later that evening.

Scherzinger, of course, found fame as part of one of the best-selling girl groups in the world during her time with the Pussycat Dolls, but has gone on to further solo fame – not only musically, but as a judge on The Masked Singer. 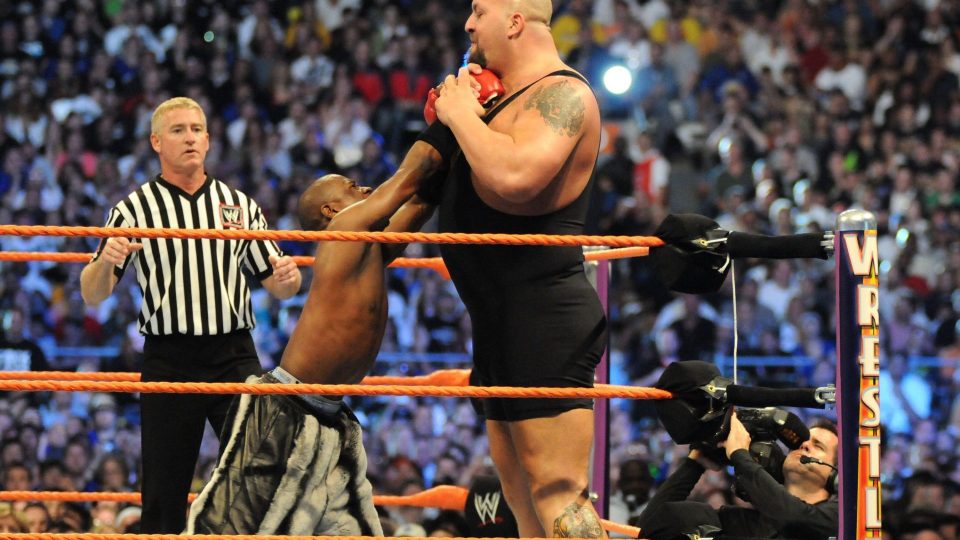 The very next year, following that iconic Shawn Michaels vs Undertaker match, a rematch took place which saw the Heartbreak Kid retire. However, we also saw another massive name appear at the Show of Shows to take on the World’s Largest Athlete is Big Show’s opponent on the Grandest Stage of Them All was undefeated boxing champion Floyd Mayweather Jr.

During his career, Floyd Mayweather Jr won fifteen major world titles before retiring with an undefeated record. However, the boxer also came out of retirement and defended that undefeated streak against UFC legend Conor McGregor – defeating the MMA specialist between the ropes.

Wrestling in a No Disqualification Match, Money Mayweather defeated The Big Show by knockout at WrestleMania XXIV at the Citrus Bowl in Orlando, Florida on March 30th, 2008 following several WWE appearances across the No Way Out pay-per-view and flagship weekly show Monday Night RAW. Mayweather also appeared on WWE television following his Mania moment. 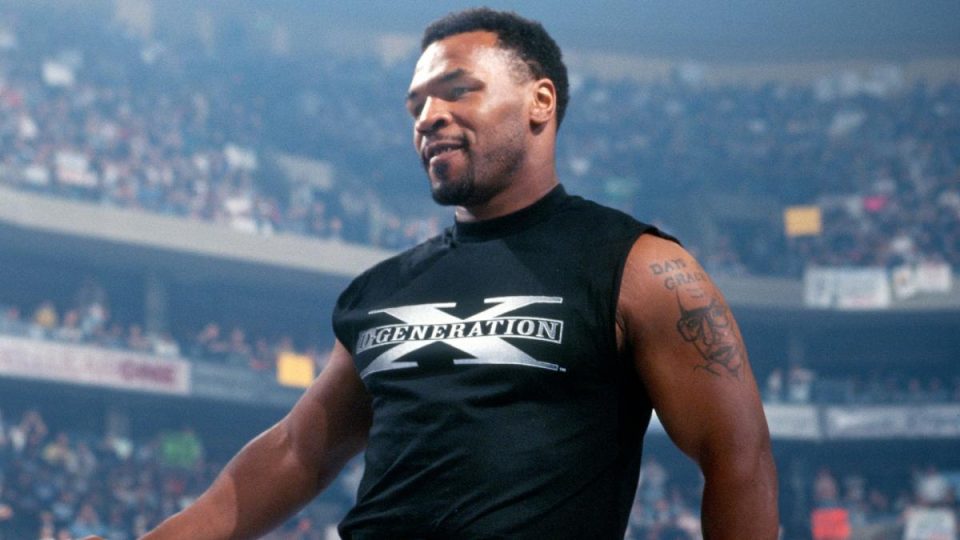 Mayweather, of course, isn’t the only boxing legend to appear at the Show of Shows as, almost exactly ten years previous, the Baddest Man on the Planet made his presence felt at WrestleMania XIV.

Having also appeared on WWE’s weekly flagship programming ahead of the Grandaddy of Them All, Mike Tyson performer the role of special ringside enforcer at the Fleet Center in Boston, Massachusetts on March 29th, 1998. With Stone Cold taking on Shawn Michaels in a main event for the WWE Championship, Tyson’s alliance looked certain as the former boxing world champion rocked up in a D-Generation X shirt. However, wrestling is always ready to swerve and that’s exactly what happened as Tyson counted the one, two, three and raised the hand of the Texas Rattlesnake.

Recently looking back on the event, ‘Stone Cold’ Steve Austin recalled his initial hesitancy at working with Mike Tyson, but was full of praise for the boxing legend who also starred in The Hangover.

“Mike Tyson was phenomenal! He brought mainstream media to our product. Vince is one of the greatest promoters of all time; he was right. Mike and I hit it off right away. We didn’t sit there and have BS sessions every time we did something together. But Mike was a historian and fan of the business, and he knew a lot more about the business than most of the guys in the locker room. I wondered at WrestleMania XIV if the moment would be too big for him; would he handle the pressure? Hell, Mike is ready for any big moment. I was glad to do business with him.” 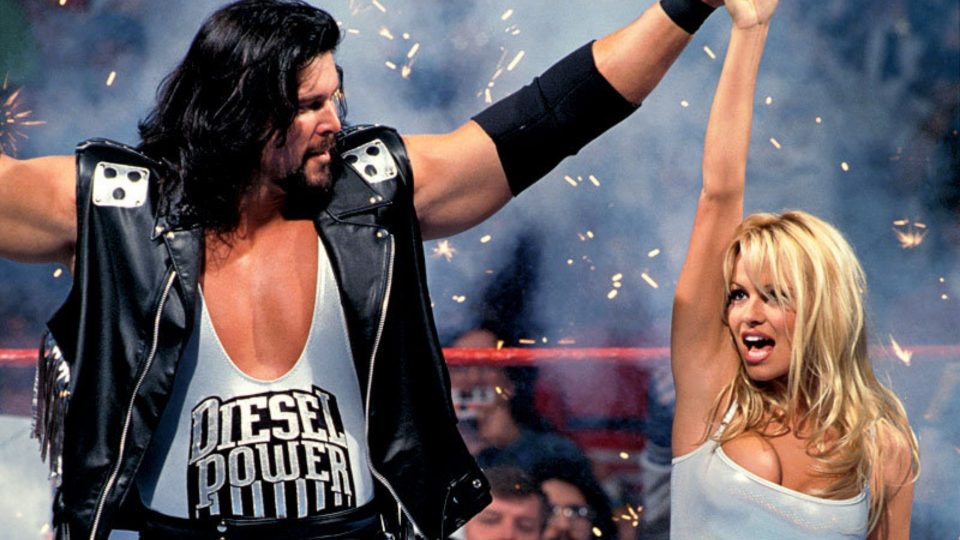 WrestleMania XI saw the appearance of one of the hottest stars on the planet at that time, as Pamela Anderson appeared as a guest valet for WWE Hall of Famer and then-World Heavyweight Champion Diesel, who successfully defended the title against Shawn Michaels at the Hartford Civic Center in Connecticut.

The Baywatch star initially appeared at the Royal Rumble of that year, promising to accompany the winner of the 30-man elimination match to the ring for their bout at the Show of Shows. However, Mr WrestleMania wasn’t left completely in the dark as his valet for the encounter was Jenny McCarthy – Pamela Anderson’s fellow Playboy cover model. The conclusion of the match left the Heartbreak Kid heartbroken though, as both Anderson and McCarthy left with Diesel.

McCarthy and Anderson have also appeared together in spoof horror comedy Scary Movie 3, and McCarthy is part of the panel of Masked Singer judges with fellow WrestleMania celebrity guest Nicole Scherzinger. Anderson is also still one of the most easily recognisable stars on the planet – and is no stranger to a Hollywood cameo, as well as being an animal rights activist. 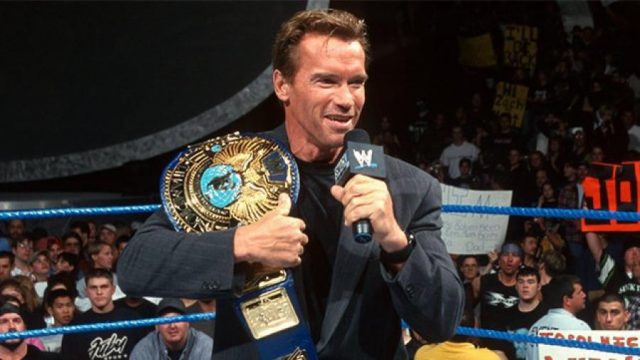 While Arnold Schwarzenegger is no stranger to the squared circle, the WWE Hall of Famer’s appearance on this list is a little bit of a sneaky one. Arnie’s WrestleMania appearance was a monumental one, despite the Austrian Oak not physically being in attendance.

On the same weekend as his Hall of Fame induction, Schwarzenegger appeared on-screen, reprising one of his most iconic roles, as part of Triple H’s incredible Terminator Genisys-themed WrestleMania entrance ahead of The Game’s encounter with ‘The Icon’ Sting at the Levi’s Stadium in Santa Clara, California

Schwarzenegger’s cameo at the Show of Shows was only the latest in a long-standing set of appearances which have seen the Terminator star appear on SmackDown in 1999 where he even provided commentary for a match which saw the bodybuilder throw a steel chair to Steve Austin before beating up Triple H himself. Two years previous to his own Hall of Fame induction, Schwarzenegger inducted long-time friend Bruno Sammartino into the WWE Hall of Fame. 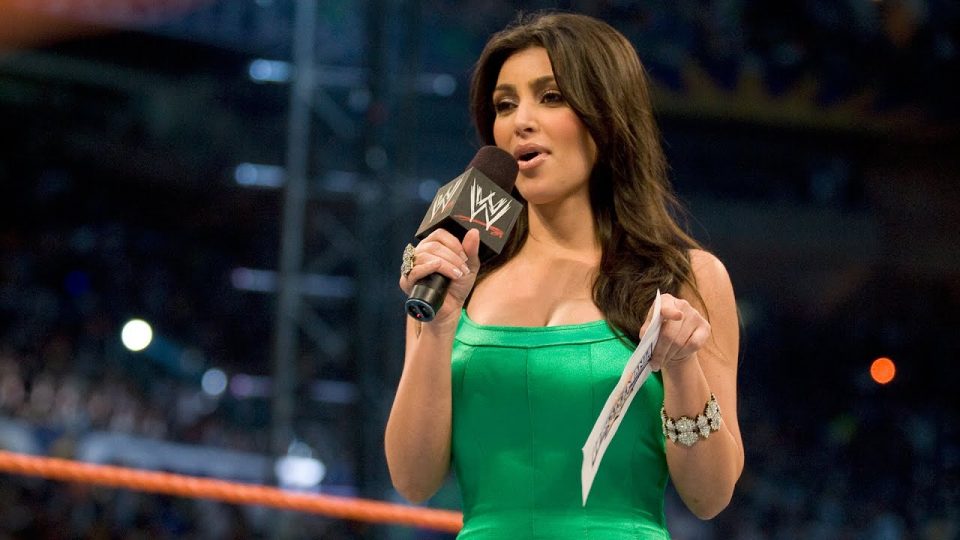 There aren’t many bigger names on the planet than Kim Kardashian. With almost 70 million Twitter followers and “breaking the internet” on her CV, Kim Kardashian is big news no matter what she does.

In 2008, the Keeping Up With The Kardashians star took to the Grandest Stage of Them All – at the Citrus Bowl in Orlando, Florida – to host WrestleMania XXIV! Kardashian made several appearances throughout the Show of Shows which that year saw Edge try to end The Undertaker’s Streak in a World Heavyweight Championship match, with Randy Ortn defending the WWE Championship against Triple H and John Cena – while Kane won the ECW Championship from Chavo Guerrero. Other notable matches were the aforementioned Floyd Mayweather Jr’s No Disqualification Match with The Big Show, and Ric Flair’s retirement match against Shawn Michaels.

Don’t miss the stupendous two-night WrestleMania, streaming LIVE from Dallas, Texas, on Saturday, April 2, and Sunday, April 3 starting at midnight in the UK. UK fans can catch all the action on the WWE Network and BT Sport Box Office.

Sign up to the WWE Network now via: https://watch.wwe.com/register