AEW has been full of surprises since the company burst onto the professional wrestling scene in 2019. Ahead of AEW’s first pay-per-view of 2021 – Revolution on Sunday, March 7th, we take a look at 10 predictions for the rest of 2021 in All Elite Wrestling. 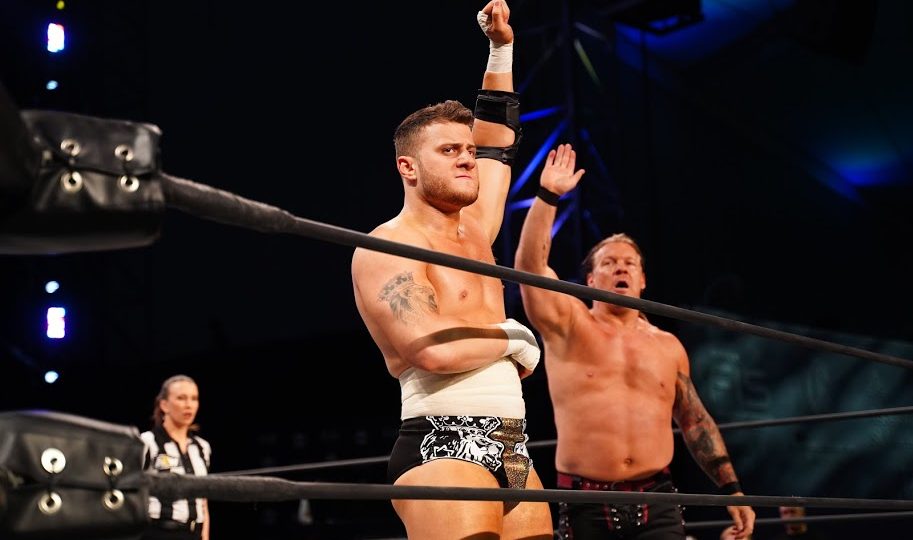 Love him or hate him, and yes, you probably hate him, there’s no denying the talent of Maxwell Jacob Friedman. The two-time Dynamite Diamond ring winner holds one on one victories over Cody Rhodes and Chris Jericho.

The one thing MJF hasn’t achieved yet in AEW is a championship reign.

Friedman was unsuccessful in challenging Moxley for the AEW World Championship but now teaming with Jericho, the pair have their eyes set on tag team gold. Whether they win those or not, MJF is certain to have more opportunities and with Wardlow by his side, a title run is in his future. Why? Because he’s better than you and you know it. 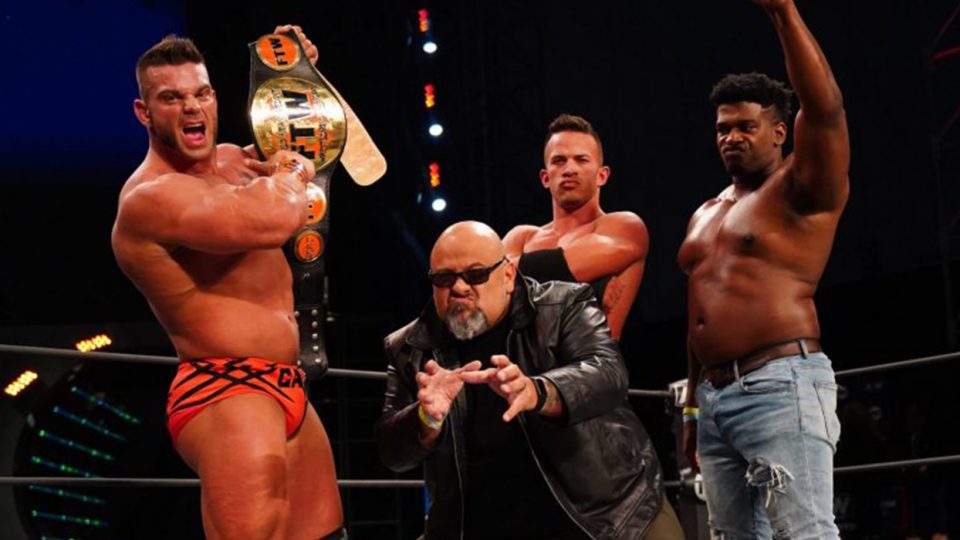 An impressive unit, but can this many egos successfully co-exist for a long period of time?

Taz is a demanding manager on the sidelines but he’s already thrown the towel in for one of his men once. Brian Cage holds the FTW Championship but this unrecognised title is the only one the group has held. They’ve unsuccessfully tried to pry the TNT Title away from Darby Allin but Darby has come out on top each time.

If Brian Cage and Ricky Starks fall to Allin and the returning Sting at AEW Revolution, then Team Taz could be on borrowed time.

Will Taz look to recruit more members, pushing those at the core of the group to the margins? Only time will tell, but this could be a rocky year for the orange team. 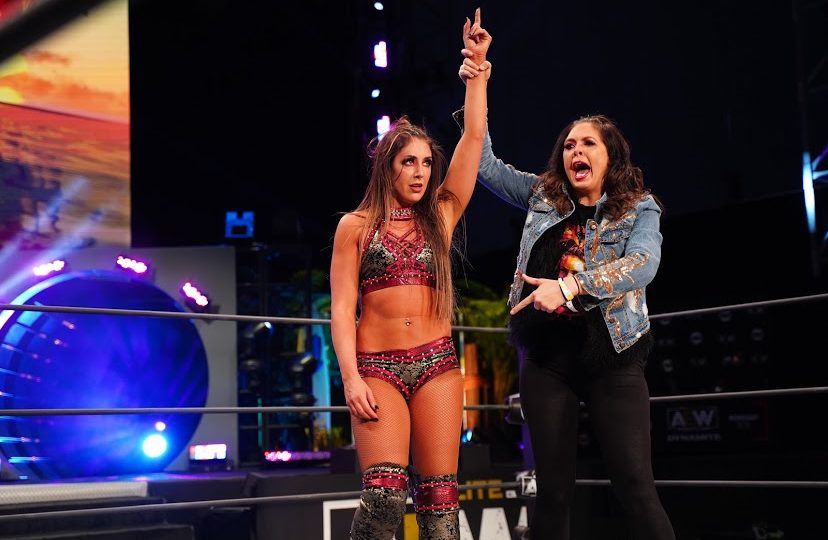 A strange one perhaps. Surely the good dentist would be more likely to become AEW Women’s Champion?

Perhaps, and she is surely one day going to climb that mountain but for now, Dr. Baker could look for gold in other places.

Her long-time nemesis, Thunder Rosa is a former NWA Women’s Champion, and with the current titleholder Serena Deeb competing in AEW a collision between Deeb and Dr. Baker could be inevitable.

With Rebel [Reba] by her side, Dr. Baker may be hoping to give the NWA Women’s Champion a nasty case of lockjaw. 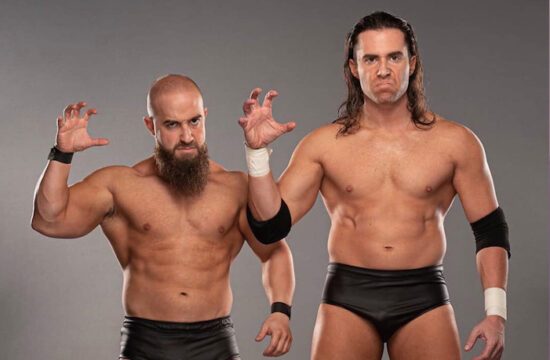 Silver and Reynolds have been around AEW since the companies inception, quickly being lured into joining the mysterious Dark Order, the pair are OGs in that group.

There would be no better way for the breakout tag team of Dark Order to honour their fallen leader ‘The Exalted One’ Brodie Lee than to win tag team gold for the group.

Hopefully, if this prediction comes true, it will happen in a time when fans can pack arenas again, as the emotion of that moment would surely be overwhelming.

Perhaps Negative One and his trusty kendo stick will be there to make sure Silver and Reynolds get the job done.

5. Scorpio Sky Strikes Out On His Own 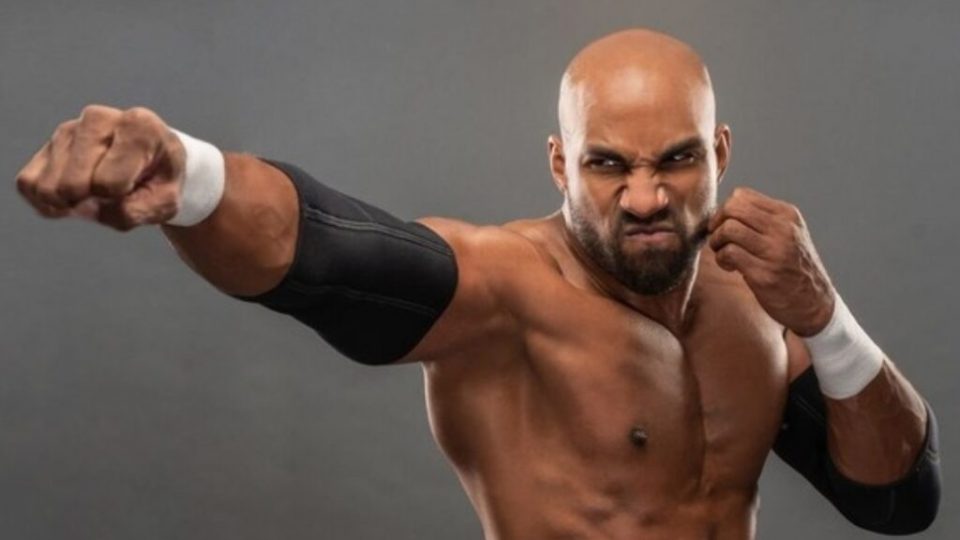 Sky was part of the first ever AEW Tag Team Champions with Frankie Kazarian as part of SCU. However, since the duo lost those titles, things haven’t gone as well for the southern California-based group.

Sky was involved in a short feud with Shawn Spears which ended when Spears defeated Sky. Since then his appearances in AEW have been limited and mainly restricted to AEW Dark.

The star of a new podcast, ‘Wrestling With The Week’ Sky may well feel it’s time to move on as a solo act in his wrestling career to try and recapture some of his former glory.

Sky is scheduled to take part in the ‘Face of the Revolution’ ladder match at AEW Revolution in March; the winner receiving a TNT Title shot. Could this be Sky’s time to realise he doesn’t need SCU to find championship gold in AEW? 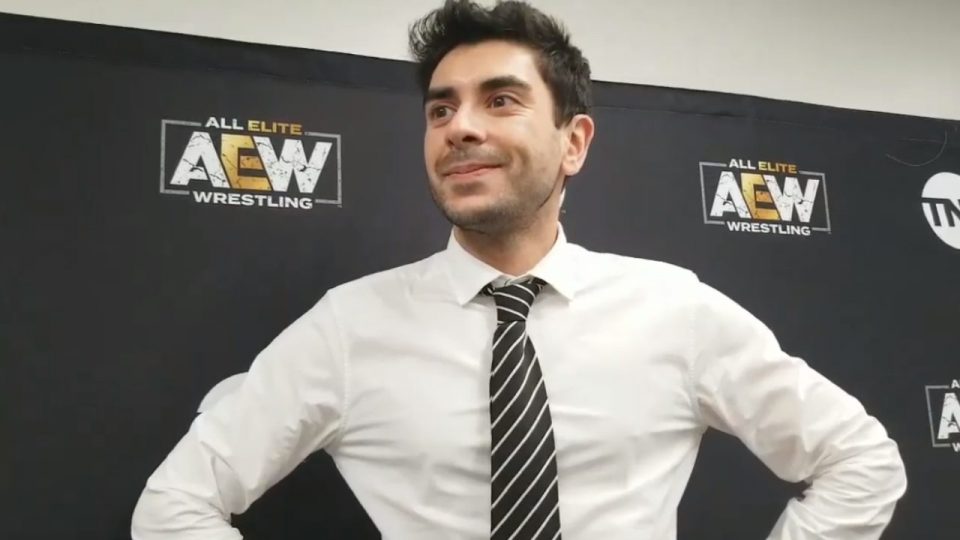 Tony Khan, the AEW President, has repeatedly said he does not want to be a character on AEW television. Viewers have only seen snippets of the boss backstage and when he came to the ring to present Brodie Lee Jr. with the TNT Championship.

However, the times are changing with the forbidden door being smashed down. How long will it be before an outsider wants to strike fear and send a message straight to the heart of AEW?

Don Callis, an IMPACT executive has already been involved in some physicality, being struck by Jon Moxley as he interfered in the Moxley v Kenny Omega match for the AEW World Title. Callis has shown he is a ruthless individual, even trying to buy off The Young Bucks to get them to leave their close friend Omega alone in his clutches. Could it be Callis that orders the strike against the AEW CEO in the battle for company supremacy?

TK, you have been warned. 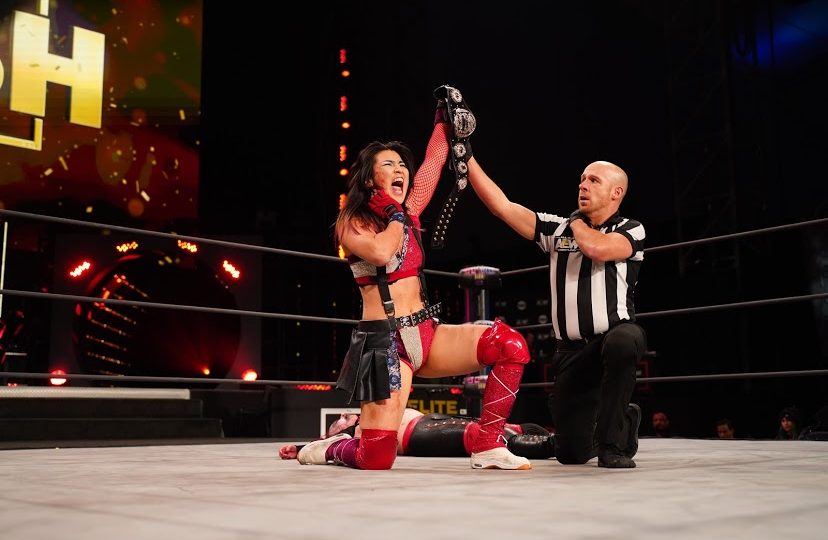 Another reason Dr. Baker might go after the NWA Women’s Title is this prediction – Hikaru Shida will not lose her title in 2021.

The women’s division is packed with talent, as demonstrated by the AEW Women’s Championship Eliminator Tournament, but Shida will prove she is a cut above.

Already with a record-setting run of longest title reign and most successful title defenses, Shida will continue to prove she is the best female wrestler in the world. 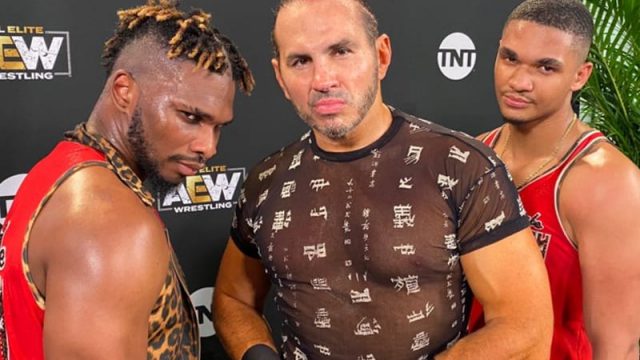 ‘Big Money’ Matt has clearly come to AEW looking to maximise his profits.

After signing Private Party to a questionable contract that sees Marq Quen and Isiah Kassidy fork over 30% of their hard-earned money to Hardy, Hardy will have his sights set on other talent acquisitions.

Private Party were unsuccessful in winning the IMPACT wrestling Tag Team Championships and they have yet to hold gold in AEW. Could it be that Hardy becomes impatient with the young stars, or will Private Party come to realise that their cash is better off in their pockets than Hardy’s?

9. AEW Will Run A Show In Front Of A Packed House 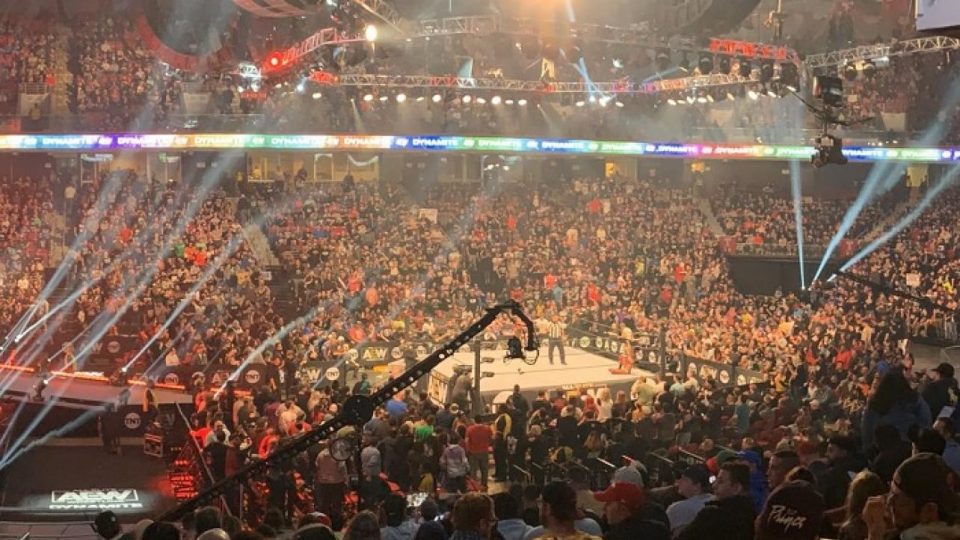 This may be more optimistic than anything but at some point in the year 2021, AEW will welcome fans back to pack out an arena.

Whether that’s Daily’s Place, which might be more likely given that it’s outdoors, or one of their cancelled shows in New Jersey or Rochester remains to be seen.

As the world begins to recover from the awful COVID-19 pandemic, getting back to wrestling will be top of many fan’s lists of things to do. Especially if the next, and last prediction comes true on that particular show. 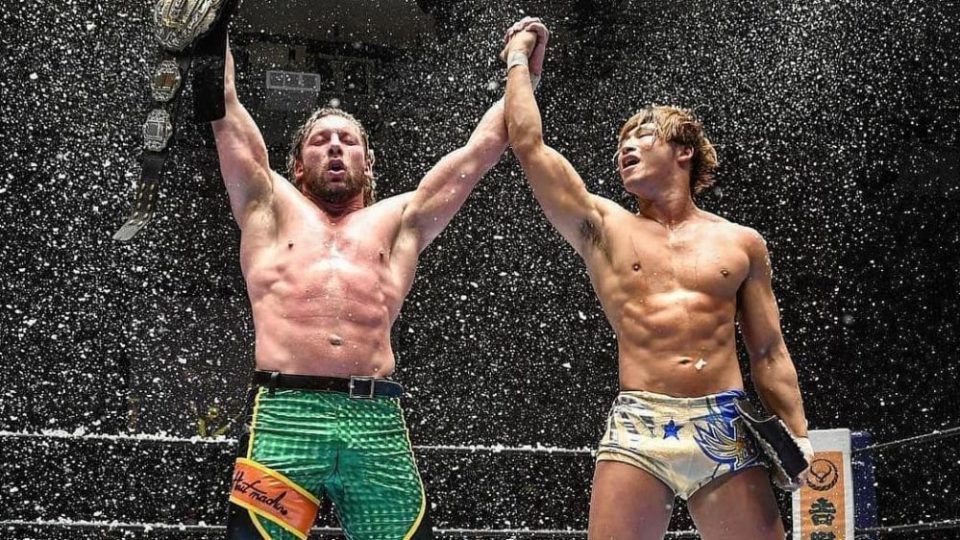 This is the big one. This doesn’t mean the two champions will square off in a match but they will come face to face with one another. Championships can change hands on any given night but at the moment, that would mean Kenny Omega and Kota Ibushi. Cue the internet in meltdown.

If you know the story of the ‘Golden Lovers’ then you will know what this moment would mean.If you don’t, then know that Omega and Ibushi have had a tumultuous relationship dating back to when they first teamed in DDT in January 2009.Omega left that promotion in 2014 and the Lovers were done for four years.

In that four years, Ibushi worked all over the planet building his reputation. Meanwhile, Omega broke bad in NJPW and morphed into ‘The Cleaner’ and the leader of Bullet Club. The duo were emotionally reunited in 2018 after Cody Rhodes seemingly kicked Omega out of Bullet Club and Ibushi saved his former partner and the two embraced in the ring.

With the two men now at the top of their respective companies, a clash seems inevitable. What will Ibushi make of this new Kenny Omega and his dealings with Don Callis? The world is waiting to find out.