What will Sting do in AEW? The December 2nd, 2020 edition of AEW Dynamite was a particularly memorable instalment of the year-old program. Future headliners MJF and Orange Cassidy were the last two survivors of the Dynamite Diamond Ring Battle Royal, Cody Rhodes and Darby Allin progressed their storyline with a tag team victory over Powerhouse Hobbs and Ricky Starks, and Kenny Omega shocked the viewing public with a surprise victory over Jon Moxley, ending Moxley’s 277-day run at the top of the AEW mountain.

All of those storyline developments would usually be more than enough to elicit an excited response from the audience, but the biggest and most noteworthy moment of the night came when ‘The Icon’ Sting saved the extended Rhodes family from a beatdown at the hands of Team Taz.

AEW has seen its fair share of surprise debuts since its inception, but few have had quite the impact or generated as much buzz as the debut of Sting; one of the most decorated and successful wrestlers in history.

As a result of this shocking and carefully managed debut, fans on social media have already begun dreaming up a series of potential scenarios that would be the best use of Sting’s aura and prodigious talents.

A large, imposing figure with a fantastic gimmick and microphone skills to revival the best in the world, Sting can still be a major attraction, especially considering he has a pre-existing relationship with casual audiences that only a handful of wrestlers in the world possess.

Sting’s last wrestling match was against then WWE World Heavyweight Champion Seth Rollins, way back in the main event of the 2015 installment of Night of Champions. The match had to be cut short after a Rollins buckle bomb damaged the then 56-year-old’s neck so severely that he would announce his retirement from in-ring competition at the following year’s Hall of Fame induction ceremony (which featured him as the star attraction).

After five years, it might be tempting to believe that the now 61-year-old legend has recuperated and rehabilitated his injury completely (especially after AEW purposely muddied the waters by listing Sting on their active men’s roster page), but much younger competitors have suffered similar injuries and never returned to the ring. That being said, at least one living legend was a little interested in a match with the former WCW franchise.

The Demo God vs The Icon

Now, before we get into the realms of fantastical speculation here, we should make two things clear: Chris Jericho is a master of self-promotion (seriously, who else could put on a wrestling cruise and have people actually show up to it) and his deliberately vague “hmmm….. @aew” quote could mean a million different things! He might be impressed with the fan’s photoshop skills, he might be building excitement for a future Talk is Jericho episode – or, yes, he could be hinting at a match.

Sting vs Jericho would no doubt be a massive draw if it were to take place at the right event. Anyone who doubts the marketability of such a match should probably note that the last time Sting stepped into a wrestling ring for a competitive match was at the aforementioned Night of Champions 2015, an event that drew nearly 30,000 more buys than the previous year’s show.

That’s a staggering number in the WWE Network era; 77,000 people shelled out top pay-per-view (a dying format) dollar instead of signing up for the WWE’s modest $9.99 Network paywall. Whether fans like it or not, that’s the difference legends can make to professional wrestling’s bottom line.

Chris Jericho has a well-deserved reputation as a ring general, and Sting, even in his current physical condition, is smart enough and experienced enough to know what he can and can’t do in order to put on a believable and intense contest.

Were they to approach the contest in the way Mike Tyson and Roy Jones Jr. did for their recent “exhibition” boxing match, the bout would not only be entertaining for audiences of all ages but also enhance the reputation of AEW, something that it desperately needs to do after making a number of questionable decisions surrounding wrestler’s welfare.

But then again, why waste what could potentially be Sting’s last match on an opponent who’s already established as a legend? Why not have Sting’s last ever wrestling match be against someone who only thinks they’re a legend?

When an icon retires and inspects the lights for their opponent in their final match, surely the best recipient of such an honor would be someone who just needs one big, career-defining moment to become a huge star?

Someone who can spend the next year boasting about being responsible for ending that legend’s career. It’s obvious who would be perfect in that role, isn’t it!?

Imagine the mileage a master like MJF could get out of being able to say, “I retired Sting, I’m the new icon!”

If such a situation were to happen early on in Sting’s run with the company (within the first year so the newly vaccinated masses would still be clamoring to see him) the heat the young upstart would get from such a boast would be nuclear.

Furthermore, he could then use this boast, and his new position as a genuine main-event wrestler, as another way of annoying an increasingly jealous Chris Jericho. With the right amount of build-up over a year or so, another MJF vs Chris Jericho match would not only be enhanced by Sting’s involvement but the long-term health of the company would be boosted as well. 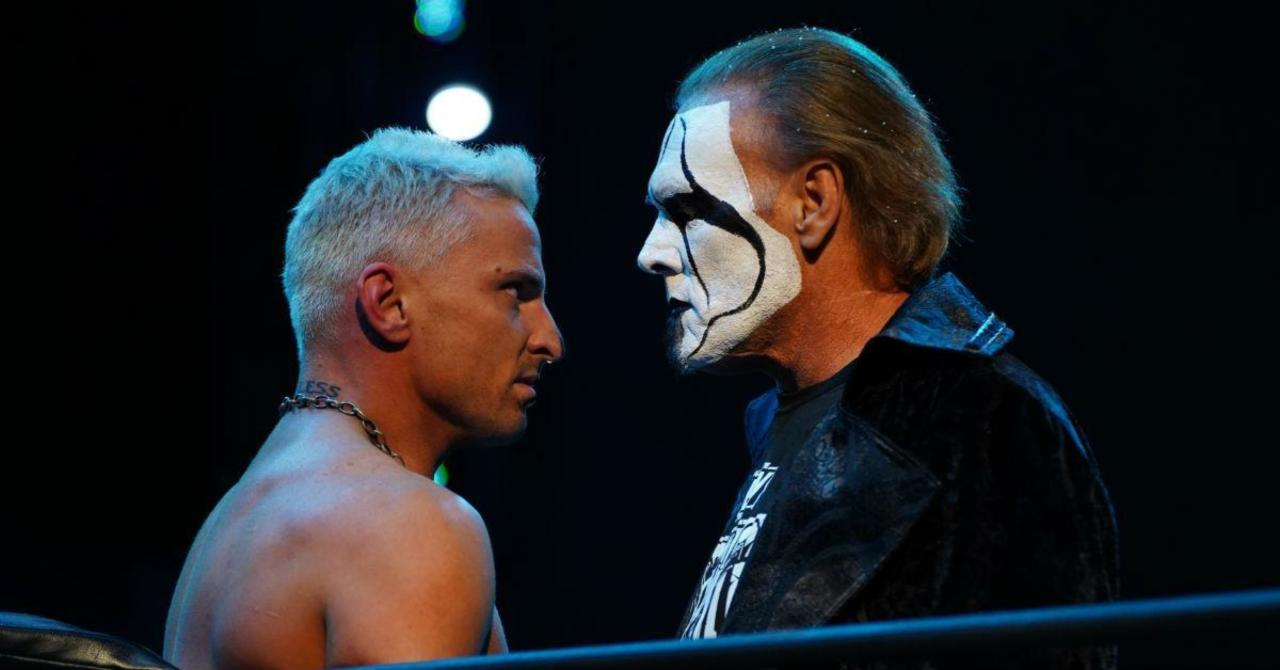 Away from the physical aspects of wrestling, Sting has considerable value in a talker/sensei role. While that’s not something he’s necessarily explored before in wrestling it is something he’d be well suited to given his age, charisma, and overall presence. If paired up with a different rising star in Darby Allin, not only would he make sense as Allin’s mentor of choice, something AEW has become adept at producing, it would also lead to other storyline possibilities with the likes of Jake Roberts and Lance Archer.

Roberts and Sting have a pre-existing rivalry that goes back 30 years and, given that it never fully reached its potential (thanks to the machinations of Bill Watts during his tenure as the Executive Vice President of WCW), a resumption of hostilities involving their charges would make for an interesting background to an already fascinating David vs Goliath feud.

After disposing of the ageing giant, Allin would be perfectly positioned for a shot at whoever happens to be the AEW World Champion at the time. I can’t think of too many other scenarios as ideal for a passing of the torch style moment than having Sting mentor Darby Allin all the way to the World Title. Well, except maybe one.

I know, this one’s out there, but over the years Sting has hinted at a full-blown heel turn but never truly pulled it off. He was a heel at the start of his career when tagging with Jim “The Ultimate Warrior” Hellwig as The Freedom Fighters/The Blade Runners in the CWA and UWF, but that was a turn necessitated by the fact that the pair were so green fans outright rejected them as faces.

His ambiguous return as “Crow Sting” at the start of his long-running feud with The NWO was supposed to hint at a potentially darker side, but Sting was so beloved by this point in his career that fans couldn’t bring themselves to boo him, no matter how hard the booking team tried to make him seem apathetic to other wrestlers’ plight.

Even when TNA formed the hilariously derivative Main Event Mafia, fans still viewed Sting with reverence, mainly because he’d come into TNA and actually tried, unlike many of his contemporaries. As a result, he was quickly kicked out of the group before he could drag the rest of the ageing stars over to the light side with him.

Imagine, if you can, a full-on heel Sting. Not just a “Look at me, I’m battering mid-carders, aren’t I dark?!” heel Sting, but a 100% committed, malevolent Sting. Who better to use the dark arts of wrestling villainy than someone who’s spent his entire career battling them? An angry, bitter, vengeful Sting would be as revelatory as Hollywood Hogan was.

If he were as determined to lead a thoroughly capable of darkness Darby Allin astray with him, all the better. Sting doesn’t have to be the all-conquering physical specimen he once was to enjoy longevity in this new organisation, far from it; a scheming, Machiavellian Sting that had given in to his long-suppressed demons would not only add a huge amount of nuance to the AEW product but also extend his career by years as he wouldn’t have to be physically involved in anything to have an impact.

Add a raging, out-of-control Darby Allin to the mix and you’ve got the potential for a heel faction that could dominate the company for a year before allowing another up-and-comer to split them up and establish themselves as a force in AEW. This storyline has the potential to not only provide AEW with a merchandising goldmine (evil Sting t-shirt, anyone?) but also turn multiple people involved into huge draws.

If used correctly, Sting – in whatever capacity he is used – will not only earn AEW way more money than they will spend on his contract but also accelerate the ascension of talent that has been ready for the next step for a while. It’s almost impossible to screw up Sting, which begs the question, “How did WWE manage it?”

Inside The Ropes Podcast #96

Kenny and Sondra are back to chat Nikki Bella for WWE Creative, Dusty tag classic… Listen